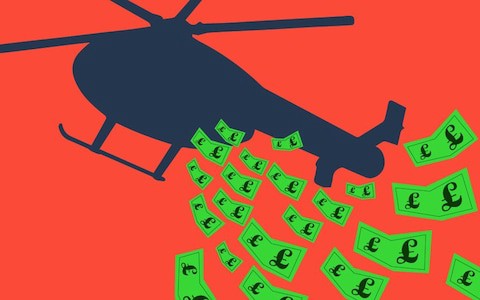 For something so pervasive in our day-to-day lives, it is unfortunate that people don’t ask themselves this question more often. Most people simply equate money with those pieces of paper stamped with faces of dead people, for that is what fulfills their preconceived notion of money — they buy groceries (means of exchange) at different relative prices (unit of account) with money saved in their checking account (store of value). It’s really no surprise then that the nature of money isn’t frequently questioned, as these pieces of paper have been all most people have known to be money for their entire life.

This hasn’t always been the case. Today’s sovereign money is — in the grand scheme of monetary history — an experiment. The U.S. dollar in its current form has been around for less than a century. Dollar bills used to be freely redeemable paper representations of gold until FDR suspended their convertibility and outlawed private gold ownership. Nixon later solidified the lack of any hard backing to the dollar when he ended the Bretton Woods System that fixed the dollar to gold in international markets. While most people wouldn’t notice any difference — after that day they went from transacting using a millennia old commodity to the “full faith and credit” of the United States.

This notion of using “fiat” — money that exists by government decree — is still a relatively new concept. And not only has it not endured the tests of time, but it has demonstrated a propensity for mismanagement. After Germany went off the gold standard post World War 1, for instance, it took less than a decade for hyperinflation to set in and their economy to collapse. From Zimbabwe to Argentina, there have been countless examples of fiat money failing spectacularly. 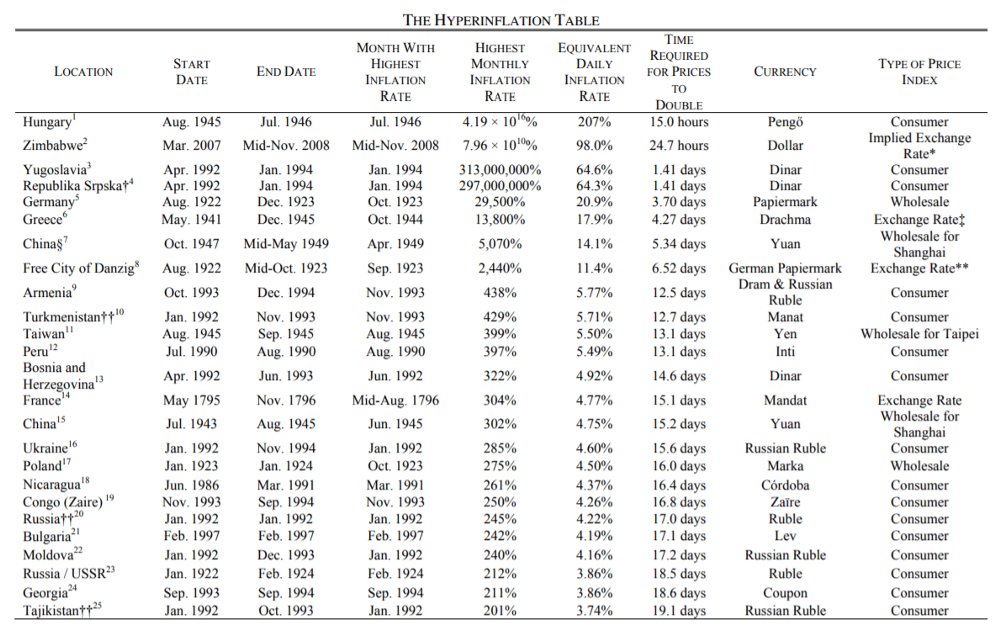 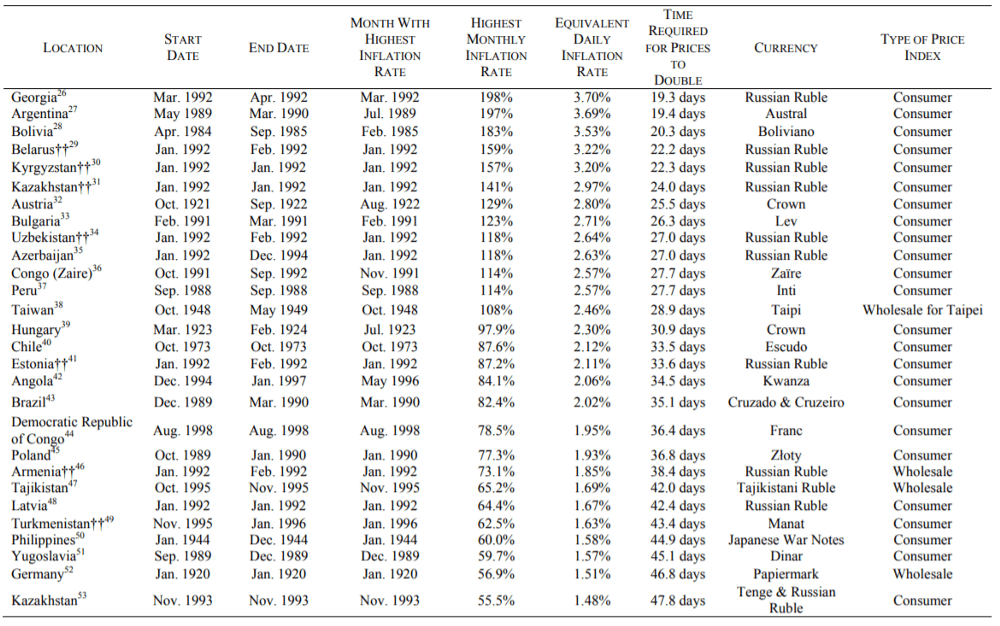 Often these are cases in which the absolute worst case occurred: the complete collapse of money led to economic ruin.

The threat of hyperinflation is always present in fiat systems, but many developed nations have been able to manage their monetary systems to avoid this type of collapse. The USD is just one example. Since its departure from the gold standard, the U.S. has maintained its status as a world power despite massive increases in the national debt and M1 money supply.

Many argue that the dollar is our leading export, and it is evident the U.S. Government has not been shy when it comes to its power of money creation. This has resounding implications for everyone using the USD.

Holding fiat means that you are continuously losing value, and in order to “beat” inflation you have to create a diversified investment portfolio. The wealthy can plow their money into equities, real-estate and commodities which bubble up from all the easy money, while those without access to these investments see their purchasing power decline. This is a classic case of the rich getting richer and is attributable to inflationary monetary policies.

Notice the chart below and what happens right around 1971… when fiat money was born in the U.S. (Source: Center on Budget Policy, NPR) 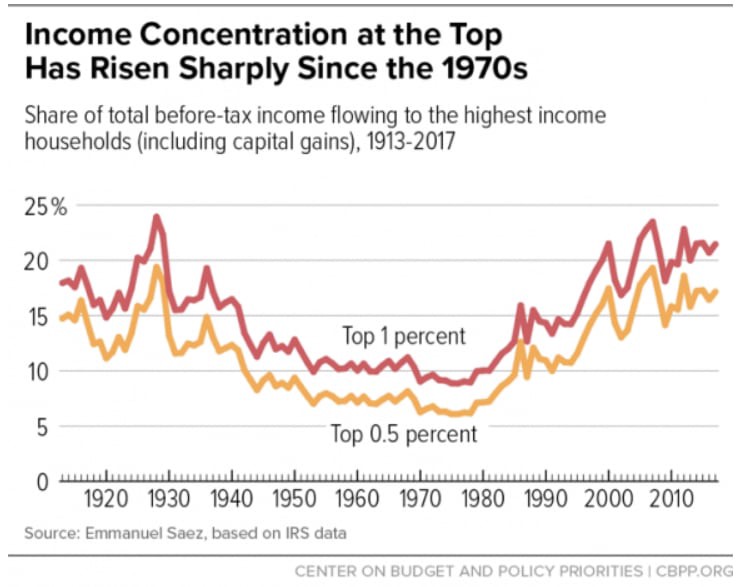 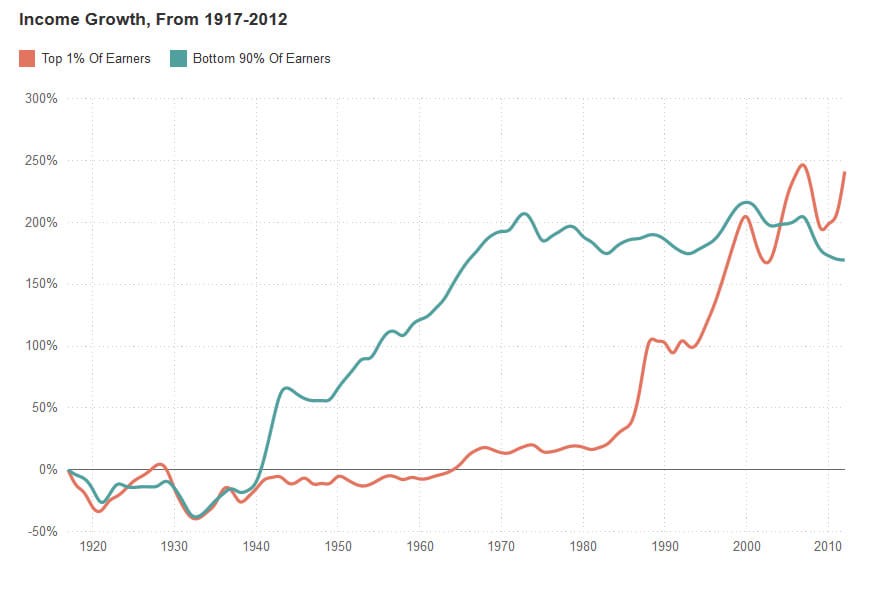 Since you know your dollar will be worth less tomorrow than it is today, you are incentivized to have a “high time preference” and to spend more now.

If you don’t have the money to spend, but lots of money is generally available, you might take out debt because you know those goods you want/need will only cost more tomorrow. Inflationary regimes lead to more spending, less saving and larger indebtedness as we see today in a society drowning in debt. 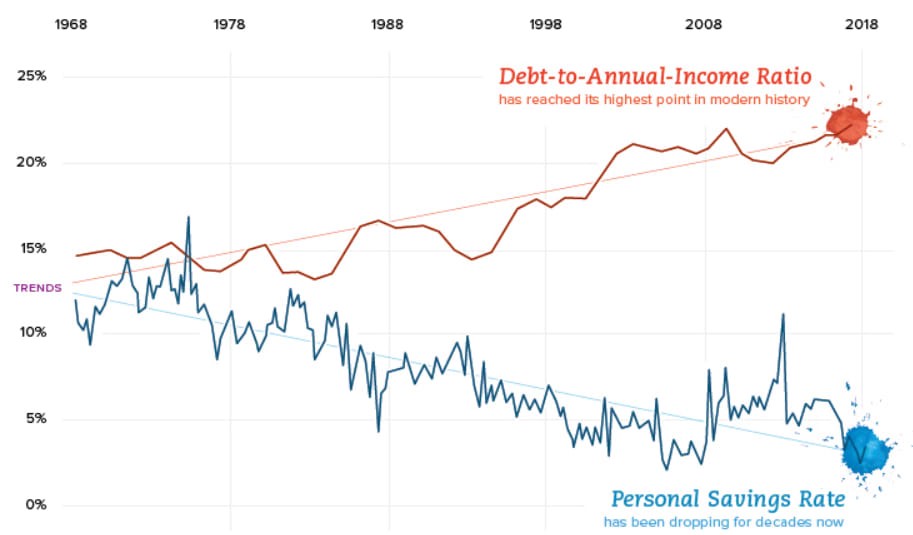 This begs the question, what other forms of money have succeeded for longer periods of time?

The obvious answer is gold, and most people are familiar with its use as money but haven’t given much thought to why. In addition to gold, humans have also used other commodities such as shells or Rai stones to transact because they held certain desirable characteristics. To varying degrees they were:

Over time goods that held these desirable characteristics outlived others. (Insert obligatory Nick Szabo article on the origins of money)

The Not So Modern, Modern Monetary Theory

While the idea of valuable commodity money makes sense to some, most of the conversation today is gravitating towards a school of thought with a diametric viewpoint, known as Modern Monetary Theory (MMT).

The foundations of this viewpoint, known as Modern Monetary Theory (MMT), date back to the early 20th century with George Knapp’s The State Theory of Money. This theory directly contradicts the prior notion that money holds value due to its desirable characteristics. Knapp argues that “money is a creation of law” and derives its value from the State, and its requirement that taxes be paid in their native currency.

The degree of “moneyness” is a result of acceptability, with the ultimate form of acceptance as payment to the government. This theory (also known as Chartalism) was further refined in The Credit Theory of Money by A. Mitchell Innes, which postulates money is a liability imposed by the State to measure obligations. When you buy groceries you are taking on debt and measuring it with that fiat. Currency acts as an IOU so the grocer then has a debt owed to them with which they can again redeem for something valuable using the currency. This seems to suggest that money has no intrinsic value, directly rejecting the prior idea of sound commodity money. The market is no longer a place where goods are exchanged but simply a clearing house for settling debits and credits.

While the sound money view says humans began with barter and transitioned to using goods with desirable characteristics to transact in order to solve the double coincidence of wants, the Chartalist view says we progressed from shells to gold coins to fiat as a result of finding more efficient means to track debt. This explains the desire to transition away from the gold standard since redemptions of paper notes for gold coins are merely the exchange of one form of obligation for another that’s identical in practice. The notion of an asset backed currency is one in which the government’s flexibility to control the money supply is restricted.

Subscribing to this Chartalist view of money leads one to arrive at some interesting policy conclusions.

In today’s world, only sovereign governments claim this ability to impose liabilities on others because they can create demand by requiring taxes to be paid in that same government liability. Therefore a government has no need to balance its budget and spending can greatly outpace tax revenue since the difference can be covered by the creation of more money — i.e. debt.

MMT economists believe that governments can create as much debt as they want so long as there is adequate demand for their currency from state imposed obligations. In theory, governments can finance themselves strictly through issuing currency until inflation rises to a point where taxes need to be levied to increase the demand side of money to keep pace with supply.

If that’s too much of a mouthful, former Fed Chairman Alan Greenspan sums it up:

“The United States can pay any debt it has because we can always print money to do that. So there is zero probability of default.”

MMT in the 21st Century

While the underpinnings of MMT are not new, there has been a strong resurgence of these ideas in recent years from both sides of the political spectrum. The modern belief is that the government can run perpetual deficits to fund wars or pay for universal healthcare. If these policies don’t work as intended and lead to financial distress, they can simply print more money! 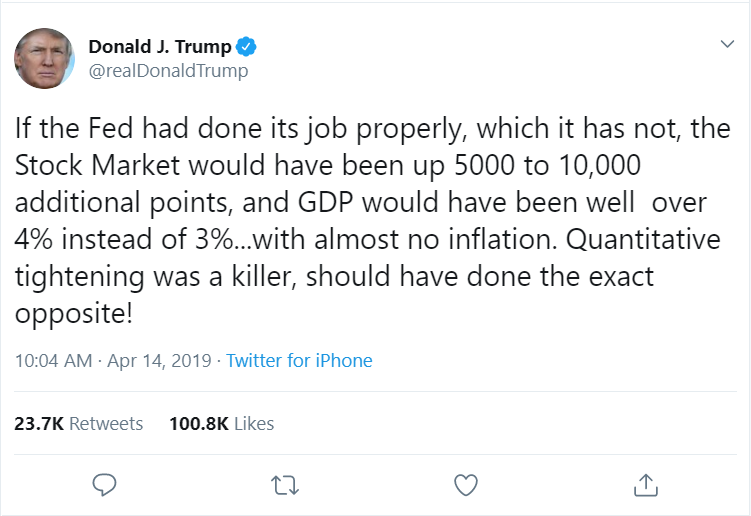 On paper the Chartalist view of money might make sense. You look around the world and every form of money with mainstream adoption is required by the State to be paid in taxes. Therefore, one could conclude that what makes it valuable is this requirement. However, a truly competitive market has not been possible to challenge the hegemony of fiat money. Every attempt from liberty dollars to E-gold was shut down by the government. The State has and will go to great lengths to maintain financial control over its citizens.

This all changed a decade ago, when pseudonymous author Satoshi Nakamoto wrote the Bitcoin White Paper and released his monetary experiment to the world that fundamentally challenged the core beliefs of MMT. The decentralized nature of Bitcoin meant that even if the State wanted to shut it down, it would be an incredibly difficult project to kill at a certain scale. This new form of money was able to exist out in the wild, allowing for the first time the possibility of a true competitor to fiat money.

Recall that the Chartalist belief is that money has value because of its acceptability by the State. This thinking would lead one to believe that an asset looking to be used as currency should not be desired unless it can be used to pay taxes. Yet, despite not operating as legal tender, it has led to millions of people across the world demand it for its desirable characteristics. Bitcoin has built a robust social contract with its users and for that reason has a network value of ~ $160 billion, nearly a million active addresses, and $17 million being spent every day to secure the network (data from OnChainFX). This contract is described in the following:

These unique features are what have allowed the unlikely outcome of Bitcoin’s relative success.

If you rebut the core assumptions upon which an argument is made, then you have destroyed the argument. MMT argues that money isn’t valuable because of its characteristics, yet bitcoin has accrued value and achieved usage solely because of them. Since people value money for its inherent nature, in the long-run money that is susceptible to be printed at the whims of the government won’t be as successful as one that is not. We’ve seen this play out in extreme situations where nations abuse their money creating abilities and their currency becomes worthless as users adopt more sound money. In a world absent free-market competition besides fiat, this has traditionally been the U.S dollar.

However, now that Satoshi has introduced Bitcoin, those living in places where modern monetary policies are rampant can now opt for an alternative. The U.S. dollar has long been a safe haven asset, but if these policies continue unobstructed that could change. (Note: The next Bitcoin halving will lower inflation below the U.S. target rate) This will not likely be an expedient process, money is a social construct that takes decades if not centuries to become entrenched in everyday life. But if you recognize the second and third order effects of fiat money and its abuses, then you should be open to the sound money alternative that is Bitcoin.