An Open Letter On Scaling Bitcoin

This is in response to Nic Carter’s piece, How to scale Bitcoin (without changing a thing).

I just got around to reading your piece on scaling Bitcoin via institutions, and it has quickly skyrocketed to one of my favorite essays in the space in recent memory. I think it’s a brilliant piece of work. It distills a lot of the current conversation around an important question:

What role do institutions play in the future of sending and storing cryptocurrency?

I have pondered this question a lot, as I operate a regulated cryptocurrency exchange in the Middle East(@rainfinancial). This question contemplates the role of my business 10–20 years from now, so you can be sure that our team has thought this through carefully. Hal Finney’s predictions about “Bitcoin banks” had an influence on me personally as well, and I still find his opinion to be the most practical/realistic take on how to scale this technology.

For me, this conversation mainly starts with what consumers need and want. I also tend to draw heavily from the historical context that we are operating in, as I have found that companies that ignore past learnings tend to repeat them. A position that Hegel knew well and would respect.

The idea that everyone is going to want to embrace the “not your keys, not your coins” mantra has always been impractical for today’s market, in my mind. Many people lack the technical expertise to setup a hardware wallet/non-custodial wallet or care to take on the cognitive load of learning to do so. In our user research at Abra, we found that having users manage the security of their money via backup phrase is not a light ask for the great majority of the population. I remember one person in particular saying something along the lines of “So you are telling me that if I lose my phone, I will lose all of my money? Are you kidding me?” As an industry, we cannot ignore that holding custody of one’s own money can be a huge barrier to entry for people.

In summary, I tend to believe that:

Most people do not want to manage the security of their money.

I think this is true today and barring any major unforeseen technological advances, I think this will be true in the near-term future as well. The great majority of people do not want to even confront the possibility of their hard-earned savings being lost or stolen. Safeguarding customer money is probably the most valuable service that banks provide, and I think consumers will continue to expect and favor it. This is especially important for high net individuals and institutions. If you have 50 MM under management, you absolutely want a team of people who are skilled enough to ensure that it cannot be lost or stolen and who have insurance to cover losses if something were to go wrong.

You could look at the growth of retail banking over the last 500 years as being a testament to this. I would love to see what the reality was like before banks were the main custodians of money. It would probably enlighten us to the market forces that resulted in people trusting banks with custody of their money in the first place.

This custodial model is not unique to financial markets. The technology market has also converged on such a model for our data. Think about:

Many in the community would decry this list as the source of an underlying problem, but let’s not forget why we ended up here. Do you remember what it was like having a computer die or your phone fall in a pool before cloud backups? It sucked. Two anecdotal stories:

This was the reality before cloud backups. We have spent the last 20 years developing easy ways for people to backup their data in the cloud for a reason. It is much more convenient and means that data loss happens far less often. It is hard for me to imagine a world where we just reverse all of that learning. I will not belabor the point by bringing up the countless stories of the elderly, unsavvy, or unlucky losing access to huge amounts of Bitcoin over the last 10 years.

All of this being said, I think one of the reasons cryptocurrency is incredibly innovative is that it provides people with a diverse spectrum of options between managing your own security and taking on unnecessary custodial risk: 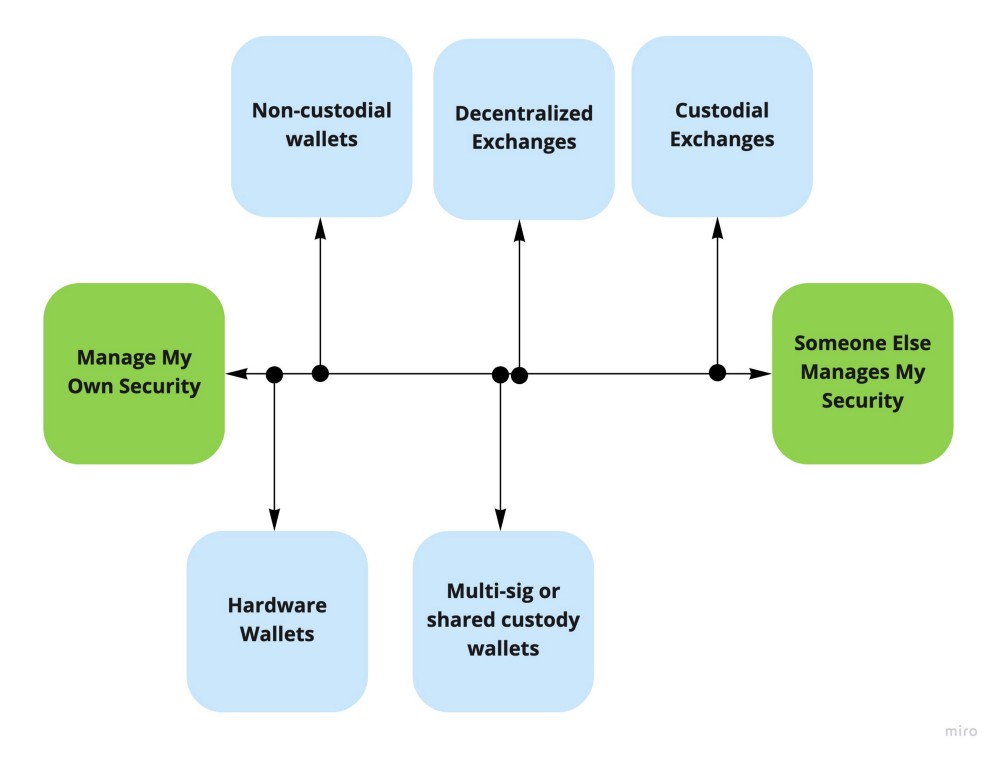 Do not think too deeply about the relative placement of each option, I am more so just highlighting that it’s a spectrum.

I think we have yet to discover the distribution of people within this spectrum, but I appreciate that it gives people options, as opposed to a system that presents only one option which is “trust me with all of your money”. I have faith that non-custodial and hardware wallets will continue to get easier and serve the “manage my own security” crowd better and better. With new UX paradigms being discovered and technology developed, I believe they can even start serving a larger percentage of the masses as well. At the same time, I believe that a portion of users will always want to have someone else manage the security of their money.

The problems with traditional banks do not stem from the fact that they provide custodial services to customers, they stem from the monetary policy underneath. As you mention in your piece and as Hal Finney mentioned, the problem with banking is not inherent in fractional reserve, it stems from the fact that there are no penalties for big banks behaving badly. Fractional reserve should be far a more risky practice than it currently is. In fact, the current financial system does not stop nations from behaving badly either. If a scarce asset were backing the entire system, banks and nations would be held accountable like individuals are. Your suggestions on Proof of Solvency could be a great method of holding such institutions accountable.

Put another way, the value of cryptocurrency is so much more than the ability to hold custody of your own money.

Although I believe that institutional scaling is a very practical way to scale the system, I think the designers of most cryptocurrencies have their head in the right place. I think we need to shoot for the moon in terms of decentralized custody, especially when it comes to money. We will undoubtedly fall amongst the stars due to consumer demand, but at least we are able to achieve the greatest spectrum of options available to us. Which is why I completely support the work of groups like BRD, Blockstream, and Lightning Labs who are making cryptocurrency reliant on centralized custodians as little as possible.

P.S. — I did not focus on the sending of cryptocurrency, as I interpreted your piece as mainly focusing on how institutions could store cryptocurrency, while also not repeating mistakes of the traditional system around accountability. I think it is clear that we will need layer 2 solutions to achieve the level of transaction volume and to support micro-transactions no matter what. It is merely a question of if individuals or institutions will be the predominant users of such a system.