The Triumvirate of Liquidity

Bitcoin is both digital gold and digital Treasuries, and has all the makings of the world’s next risk-free asset. 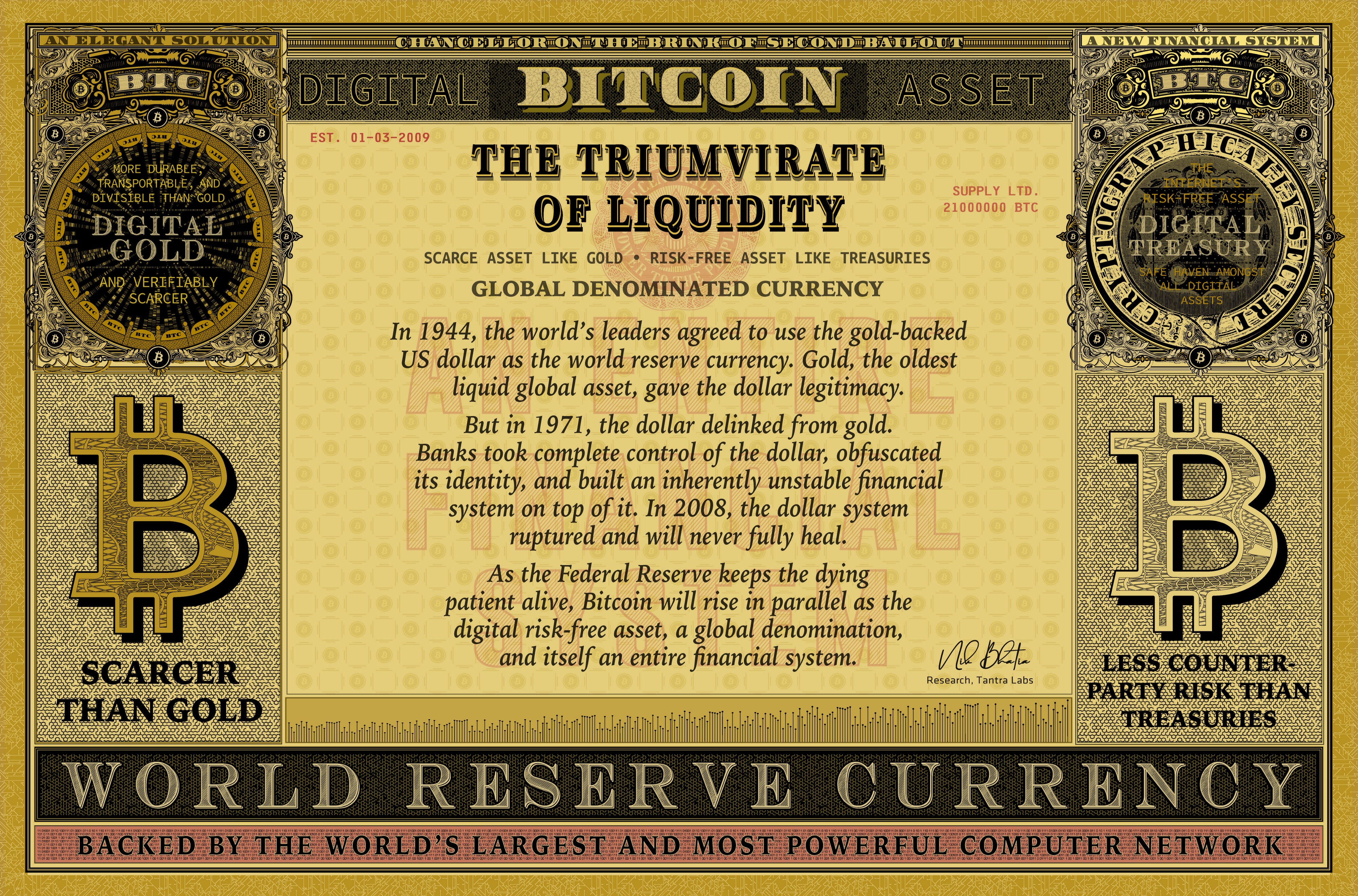 US Treasuries, gold, and Bitcoin serve as a triumvirate of global liquidity, a powerful trio of safe haven assets that shelter their owners from the risks of our highly leveraged, credit-based monetary system. Of the $300+ trillion in financial assets around the world, only $32 trillion exist at this echelon of safety and liquidity.

Bitcoin captured an astonishing 1% of the trio’s total market value after only eight years in existence, yet this was only a glimpse of the future. In its next chapter, Bitcoin will catapult toward gold’s $9 trillion size, fulfilling its destiny as digital gold. After that, Bitcoin will morph into digital Treasuries and replace them as the world’s risk-free asset before eventually achieving world reserve currency status. Replacing the dollar as the world reserve currency is a lofty ambition, but it will occur only as a byproduct of Bitcoin embodying digital Treasuries.

Gold was the dollar’s source of legitimacy

Gold is the original liquid global asset, a millennia-old money. The US dollar’s gold-backing during the 20th century earned it legitimacy, culminating in the 1944 Bretton Woods agreement in which the world’s leaders assigned the dollar as the world reserve currency. Even though gold no longer officially anchors global finance, central banks still hoard it as the world’s safe haven asset, presumably as insurance against a dollar system failure. Today, global central bank gold holdings exceed $1 trillion. 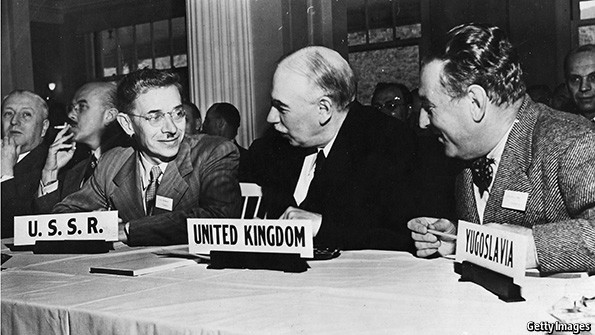 In the 1950s, a new form of dollar emerged in Europe called the Eurodollar, a book-entry dollar to facilitate interbank settlement outside of the United States and outside the Federal Reserve banking system. As Eurodollar usage popularized, banks in London, Zurich, Montreal, and Tokyo gained the power to create the international settlement currency away from any regulatory purview. By 1971, excessive dollar redemptions for gold had depleted the United States’ reserves. In order to protect its holdings of the world’s safe haven asset, the US ceased all dollar-to-gold conversions, and the dollar officially lost backing. It still, however, had the confidence of global financial participants as their ultimate unit of account.

Dollars weren’t backed by risk-free assets anymore, so how did investors store dollar reserves safely? Bank deposits are essentially loans to banks and come with an inordinate amount of counterparty risk. Withdrawing truckloads of $100 bills isn’t feasible either, nor does it come with convertibility to an underlying asset. Deposits and cash simply aren’t palatable investments for the risk-averse. The solution and capital market tendency is to purchase US Treasuries, a $23 trillion market, in order to safely store dollars.

The dollar loses its identity

From 1971 to 2007, banks took complete control of the dollar, obfuscated its identity, and built an inherently unstable financial system on top of it. Eurodollars grew both in supply and sophistication. Banks stopped funding themselves with deposits; instead, they used US Treasuries as collateral to borrow book-entry dollars from each other. A bank license and US Treasuries together wielded the power to create seemingly unlimited money, obscuring money’s very definition. The dollar lost all of the identity it once had as a gold claim and became purely a banking liability, a loan to the overly-leveraged financial system. Instead of dollars, Treasuries became the most desirable global asset, not only because of the US government’s counterparty superiority, but also because Treasuries possessed omnipotent collateral powers that enabled money creation. Banks use US Treasuries, not dollars, as their risk-free asset, collateral anchor, and primary leverage vehicle.

The dollar system breaks in 2007

In 2007, banks began facing funding pressure. The previous culture of strike-of-the-pen collateralized lending withered away, and banks were unable to roll forward their maturing debt. Banks relied on their ability to constantly issue new debt, and when confidence in them faltered, so did solvency.

For decades, the relationship between dollars and Eurodollars existed without much drama; Federal Funds and LIBOR, the interest rate of each dollar type, mostly mirrored each other. In August 2007, however, LIBOR drifted higher relative to the Federal Funds rate, a sign of acute credit risk in the Eurodollar system. In hindsight, the problem wasn’t acute: banks began pulling back from each other as the global dollar system had reached an inflection point. This interest rate divergence foreshadowed the subsequent cascade of dollar-funding shortfalls and bank collapses. The multi-decade free run of money creation had cracked irrevocably.

In 2008, the Federal Reserve bailed out the world by liquifying the entire system. It chose not to discriminate between dollar liabilities and Eurodollar liabilities, and provided a lifeline to any bank or central bank in need by injecting reserves onshore and providing currency swaps offshore. Demand for the safety and liquidity of US Treasuries skyrocketed as they became the world’s security blanket, trapping the world in a dollar denomination even though the dollar’s long term viability as world reserve currency was irrefutably in question.

The financial system is infected with a chronic disease that won’t go away. The dollar is no longer solely the national currency for the United States issued by the Federal Reserve. Instead, the dollar is an international banking instrument without limits, form, or the ability to sustain itself. The system decays as contractions in interbank liabilities cause repeated liquidity shortages for leveraged asset holders. Banks choose not to provide collateralized liquidity to other banks, even when the collateral is Treasuries themselves. This is the ultimate warning sign that banks don’t trust each other anymore. Furthermore, the Federal Reserve always bails out the system as the lender of last resort, permanently eliminating any motivation whatsoever for banks to provide liquidity to each other. The Fed’s default response is to create US dollar bank reserves, but this does not address the core problem of broken interbank trust. The Fed only provides a numbing mechanism, keeping the dying patient alive as long as they can.

What’s the endgame? Bitcoin is. Its software is engraved with “Chancellor on the Brink of Second Bailout” to proclaim an elegant solution to our banking system nightmare. Bitcoin is a bearer asset like gold, a risk-free asset like Treasuries, and a currency denomination like the dollar, rising up in parallel over the next couple decades as the infrastructure for the next financial system. 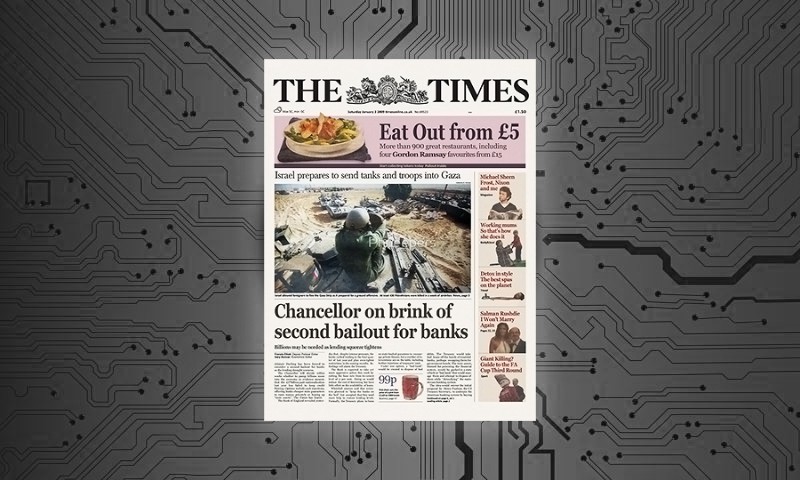 Gold and Bitcoin are both scarce assets without counterparty risk, yet Bitcoin’s digital final settlement functionality gives it a massive advantage over gold in the coming decades. Bitcoin is not only digital gold though, it’s also digital Treasuries. Bitcoin is the safe haven from all other digital assets, just as Treasuries are the safe haven from all other dollar assets. Bitcoin is used as collateral for derivatives agreements just like Treasuries are. But Bitcoin doesn’t have the counterparty risk or supply variability of Treasuries, positioning it perfectly for the forthcoming competition.

Bitcoin is the risk-free asset of the future.

The Bretton Woods monetary system established the dollar as the world’s reserve currency in 1944, but the next monetary system will not be determined by agreement between nations. Bitcoin’s path to world reserve currency status will occur one asset holder at a time. Thanks to the early-stage Lightning Network, Bitcoin’s design now includes an instantly settling currency function in addition to its slower asset function, a characteristic neither Treasuries nor gold possess. But Bitcoin first needs to add many trillions in market value to truly compete with Treasuries and gold as an asset class.

Investors demand risk-free assets when they face geopolitical and economic uncertainty. Securing the liquidity of these assets is paramount when other asset classes experience the brutal combination of increased performance risk and liquidity deterioration that is so common in today’s financial world. In this era of dollar system fragility, the Triumvirate of Liquidity will reign supreme. Investors will scramble for financial safety, causing intense and persistent demand for US Treasuries, gold, and Bitcoin.

Start here and here for a dive down the Eurodollar rabbit hole.

Author’s opinion only. The views and opinions expressed in this article are those of the author and do not necessarily reflect the position of Tantra Labs SPC, (“Tantra”) or any other company. Examples of analysis performed within this article are only examples. They should not be utilized in real-world investment decisions as they are based only on very limited information. Assumptions made within the analysis are not reflective of the position of Tantra or any company.

Non-reliance. The information set forth herein is for information purposes only and should not be relied on or construed as investment advice, counsel, or solicitation for investment in Tantra or any other company. Interested investors should seek appropriate independent professional legal, investment, and tax advice prior to relying on any of the material contained in this article.

Forward-looking statements. Certain information set forth herein contains forward-looking statements that give a reader the opportunity to understand the author’s beliefs and opinions with respect to the future. These statements are not guarantees of future performance of Tantra or any other company and undue reliance should not be placed on them, as they necessarily involve known and unknown risks and uncertainties.

Not a securities offer. This article does not constitute an offer of securities by Tantra or any other company.

Thank you for reading, and stay tuned as we present our ongoing research!

For more about Tantra Labs, check out our introductory post here.

For more from Nik Bhatia, check out his other work on Medium.

For more from Lucho Poletti , check out his website.