Bitcoin is not going into a “mining death spiral.”

Now that we’ve gotten that out of the way… rather than fear-mongering, The Block is committed to clarifying comments and concerns posed by crypto-fund managers and enthusiasts alike with level-headed technical clarity.

The case that Bitcoin is going into a miner-induced death spiral is intuitively compelling: Bitcoin prices drop materially, eventually marginally profitable miners shut off, ad infinitum, until all the miners are gone and no one mines Bitcoin (cue: Bitcoin is dead, redux).The argument is crutched on a few core assumptions often relied on by critics: $BTC would have to trade sub-$1000, with hash rate dramatically dropping off before the difficulty adjustment, the variable representing the difficulty of mining a new Bitcoin block. Miners, who are strictly rational short-term, would then choose to shut off all their miners or mine alternative cryptocurrencies rather than take losses mining Bitcoin unprofitably.

For context, Bitcoin’s difficulty adjustment doesn’t happen every two weeks. The difficulty of mining a Bitcoin block is naturally adjusted by the system every 2016 blocks, which probabilistically averages to two week intervals.

This tends to follow the hash rate, as seen below:

The biggest issue with the mining death spiral case is that we’ve seen this before. The narrative was first entertained on Bitcointalk forums as early as 2011. More recently, there was a resurgence in the ASIC era with the last cycle of Bitcoin mania. As now Messari CTO Dan McArdle noted in a January 28th, 2015 tweet: “What happened to everyone arguing that price-drop -> miners leaving -> systemic incentive fail spiral? Did it not happen after all? #duh”

Of course, while industrialized mining has changed the landscape materially, the fundamental game theory Bitcoin relies on have not. Bitcoin analyst Nic Carter elegantly explains the possibilities: 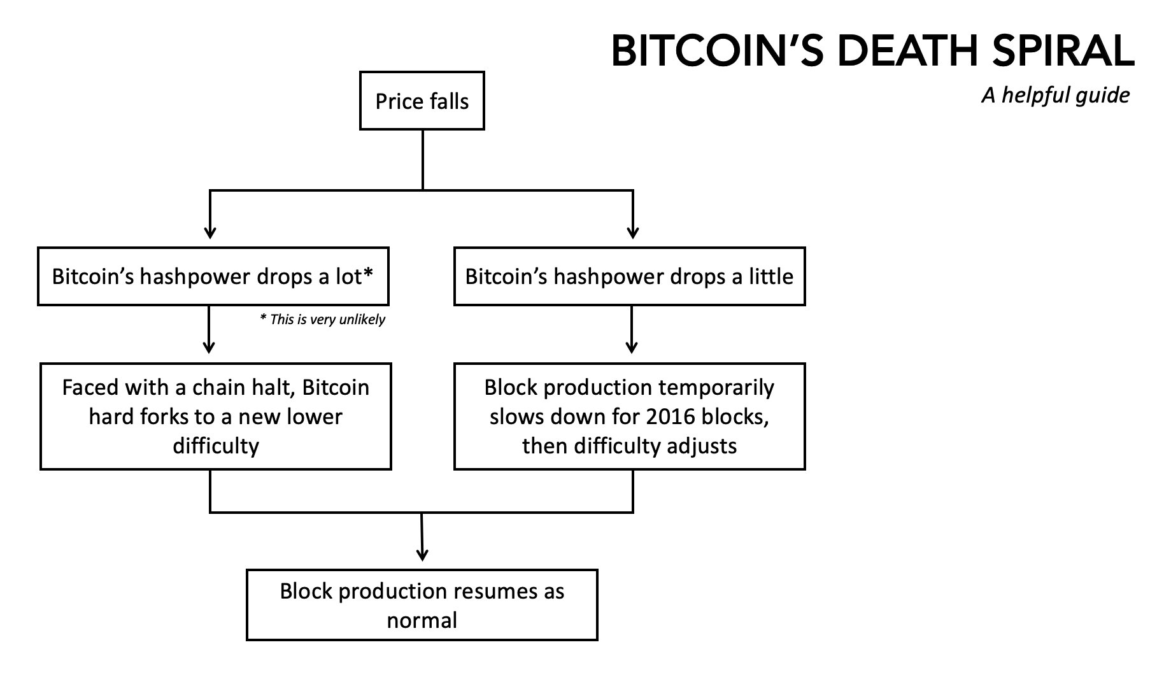 Before the proposed death spiral, Bitcoin could have an emergency fork to a manually adjusted lower difficulty (to speed up the process to the next natural adjustment). Of course, this is very undesirable and should be considered a last-resort.

The third possibility and likely possibility isn’t covered on Nic’s original chart out of simplicity: when hash rate drops off precipitously in between difficulty adjustments, higher fees can serve as a market-funded incentive to force miners to stay on.

Prior to proclaiming Bitcoin’s demise due to the death spiral, it’s important to understand a few common misconceptions about miners and their relationship with the difficulty adjustment:

The nuances of Bitcoin’s game theory — the fee market, miner incentives, etc. — are often mis-understood and mis-represented with appeals to narrative, rather than historicism and pragmatic analysis.

Be better than the narrative. Disclosure: Arjun Balaji is an analyst, engineer, and technical advisor to The Block. He founded Shomei Capital and holds bitcoin.