Why Are These Professional War Peddlers Still Around? Pundits like Max Boot and Bill Kristol got everything after 9/11 wrong but are still considered “experts.” https://www.theamericanconservative.com/articles/why-are-these-professional-war-peddlers-still-around-tucker-carlson-max-boot-bill-kristol/

In 2003 Wolfowitz told Congress the Iraq war would be practically costless. It turned out to cost more than $2Trillion. With hard money Wolfowitz would have had to raise the $2T BEFORE war. With easy money, he can get his carnage on & leave taxpayers footing the bill for decades

Wolfowitz was not alone. Richard Perle, Lawrence Lindsay, Kenneth Pollack, Glenn Hubbard, Ari Fleischer, Donald Rumsfeld, & Mitchell Daniels all lied about the expected cost of war. They all got paid handsomely for it; never had to pay back a dime.

Who Said the War Would Pay for Itself? They Did! Unwise words from the “experts” who promised a cost-free war. https://www.thenation.com/article/who-said-war-would-pay-itself-they-did/

Modern “intellectuals”, who are government propaganda parrots, think this is just how war works. I urge you to read Hoppe’s Democracy The God That Failed for an explanation of how war functioned under governments forced to be responsible by hard money: riosmauricio.com/wp-content/upl…

Under hard money, governments had to finance their operations from their citizens, which made wars possible when necessary but bankrupted governments that engaged in unnecessary war. War was limited & contained to expensive armies kings were careful to not decimate needlessly.

Whatever you think of the retarded Keynesian economics used to justify government control of money, you need to come to terms with the fact that the most horrific criminals of history have all operated with easy government-controlled money, as discussed in The Bitcoin Standard: 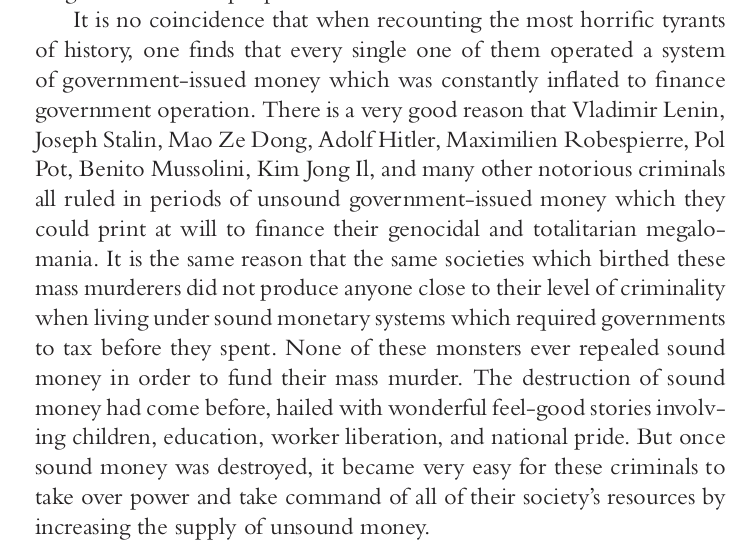 This is why bitcoin matters, and this is of course the point that critics of bitcoin miss. What better technology do you have for castrating scum like Kristol & Wolfowitz & preventing their sociopathic minds from capturing government money & causing millions of deaths?

Bitcoin’s real cost is in hardware & electricity needed to run the network. Fiat’s real cost is the hundreds of millions of deaths financed by government made omnipotent by inflation. Which do you find more expensive? Which would you rather pay in the twenty-first century?

Bitcoin might end up consuming half the world’s electricity, but if it prevents one war, that would be the best bargain humanity ever got. Bitcoin might be the most important application of electricity. Can you think of a better use for electricity than neutering mass murderers?