Here to share my thoughts & ideas concerning cryptocurrencies. Hoping to learn & digest meaningful content that will expand my knowledge and thought process.

The Race to Acquire One Bitcoin: Time’s Running Out

Bitcoin’s recent rally, earlier this month, caught many by surprise. There’s been a litany of theories trying to explain this resurgence, some of them absurd, others seemingly more viable.

Regardless of the noise, there’s a renewed optimism surrounding this sudden increase. Even with this positive price action, Bitcoin is still down considerably and is much more affordable than it’s former $20k high.

With a shifting sentiment and increased adoption, 2019 may possibly be the last year that many, excluding the extremely wealthy (i.e., the top 1%), will legitimately have the means to afford a single Bitcoin . What would you do if you knew you only had months, or even weeks, to purchase a full Bitcoin?

The Upside: A Six-Figure+ Bitcoin Sooner Than Expected?

“ If Bitcoin does succeed, 1 Bitcoin may be worth more than $1 million in 7 to 10 years.” — Wences Casares, CEO of Xapo and Member of PayPal Board of Directors

Current Market Cap is reflective of April 11, 2019 — NOTE: The numbers above do not account for changing circulating supplies of Bitcoin

Each day Bitcoin persists, the longevity and prospects of Bitcoin network’s proliferation are enhanced. For whatever reason, buying Bitcoin is not attractive until it’s “overvalued”, but “unpopular”when it has fallen greatly from all-time highs. This was demonstrated in 2017, as new highs were crushed, causing a frantic and irrational market.

Bitcoin’s all-time high in market cap was around $326 Billion on December 16, 2017. This means that Bitcoin would have to increase it’s all-time high by nearly three times to reach the $1 trillion mark (see table above). If this is attained, then the current Bitcoin price would increase more than 11x from it’s current price ($5000 as of 4/11/19). 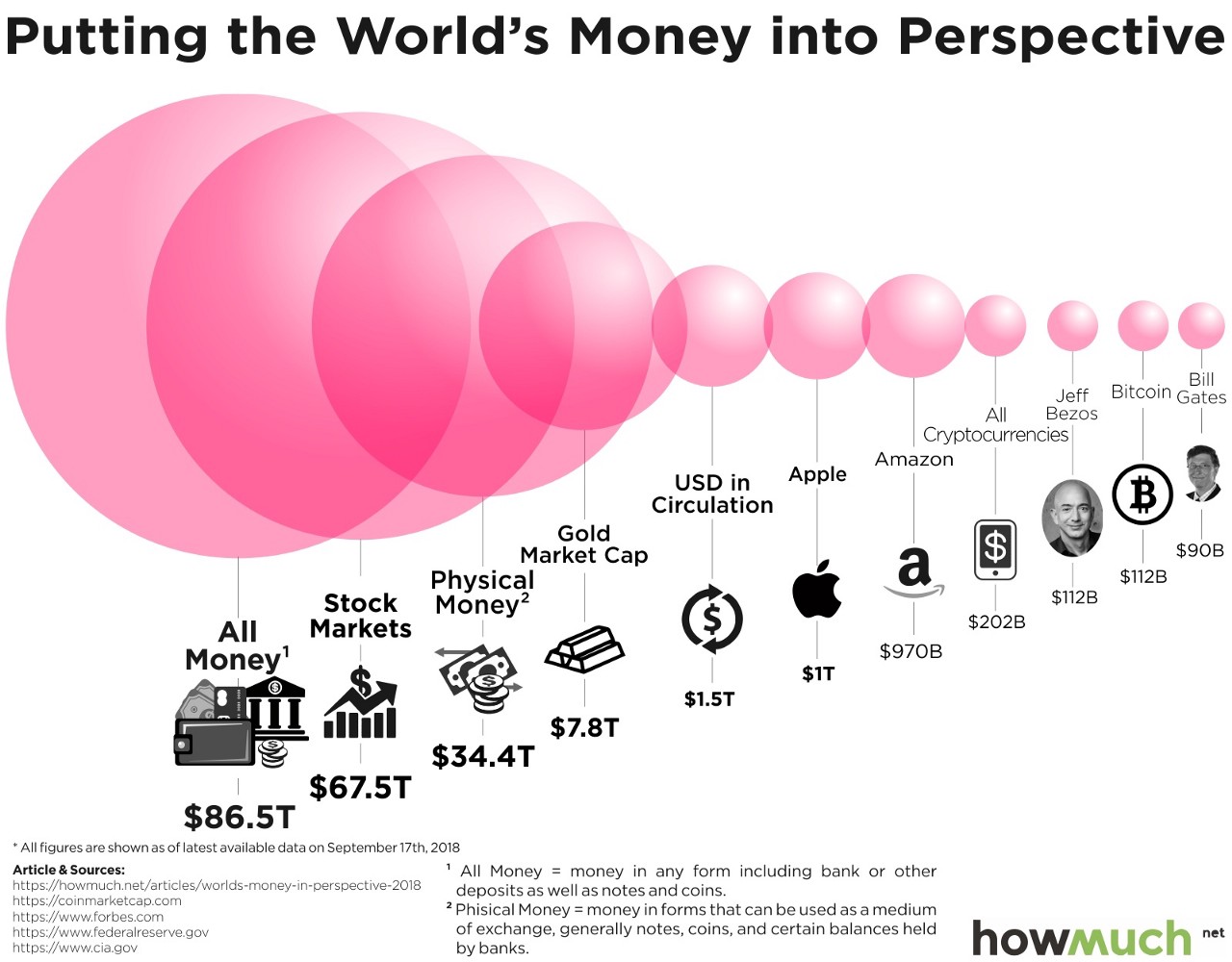 With Bitcoin’s current market cap, it is dwarfed by traditional assets classes (see image above). As Bitcoin gains traction, especially with ever-improving fundamentals and gaining interest, breaching the $100k barrier may be attainable within the next couple of years:

Bitcoin to Surpass $100k by 2021? For nearly the entirety of 2018, the cryptocurrency space has experienced the doldrums of a bear market and Bitcoin has… medium.com

The One Bitcoin Rule

There’s a sort of belief, held by many in crypto, that individuals should purchase an entire Bitcoin before entertaining altcoins. This ideology does make sense on a few levels when considering the following about Bitcoin:

At this time, Bitcoin is holding strong at $5000, so to expect someone to own a full Bitcoin is often unrealistic. However, strategies such as dollar cost averaging can be an be an aid in reaching the one Bitcoin milestone.

Bitcoin is Primed for a Bigger Move 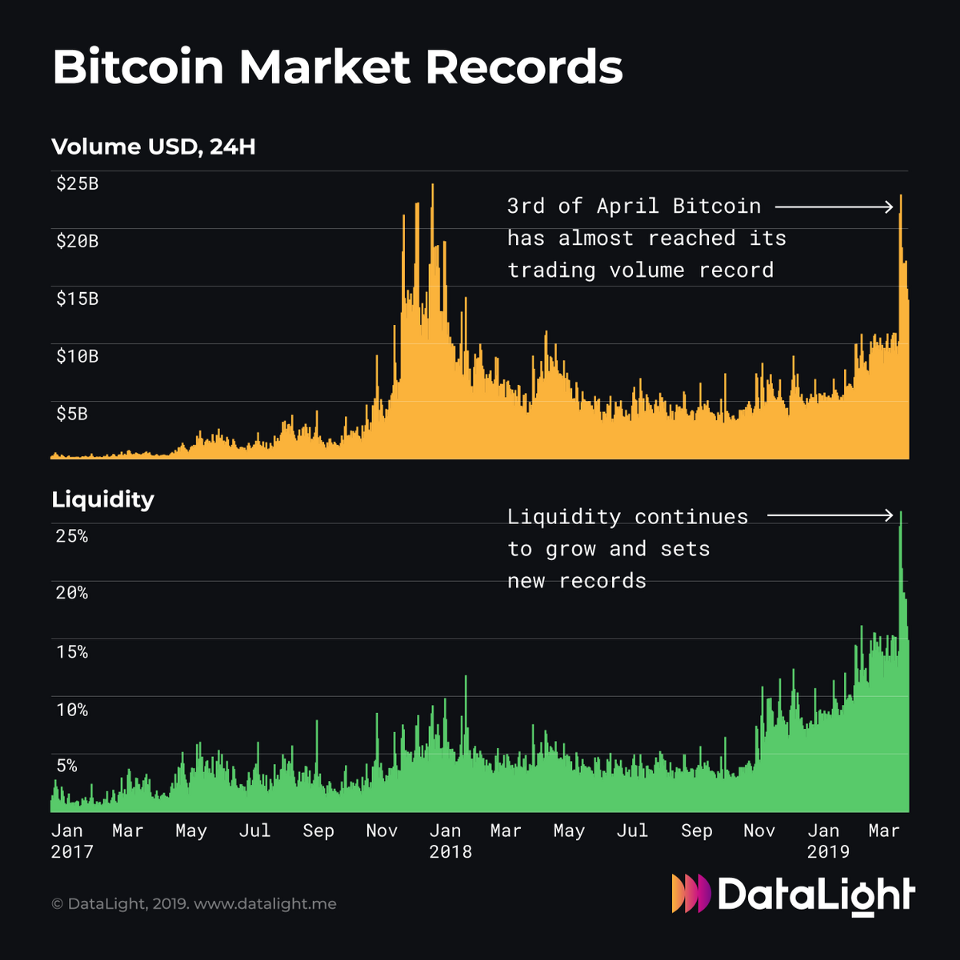 With the market being recently reinvigorated, volume and liquidity are moving to the upside (see image above). Also, hash rate is regaining momentum and is in an upwards trend. This strengthening hash rate is vital for numerous reasons:

Bitcoin’s hash rate over the past two years (Source: Blockchain.info)

Some will scoff at the idea of entering altcoins before purchasing any Bitcoin. It is my personal belief, that Bitcoin should represent a sizable percentage of your crypto portfolio. Even so, I don’t believe you should necessarily have one whole Bitcoin before diversifying into altcoins. Really, it depends on the personal goals of each person (e.g., will you use altcoins to accumulate more Bitcoin? etc.). 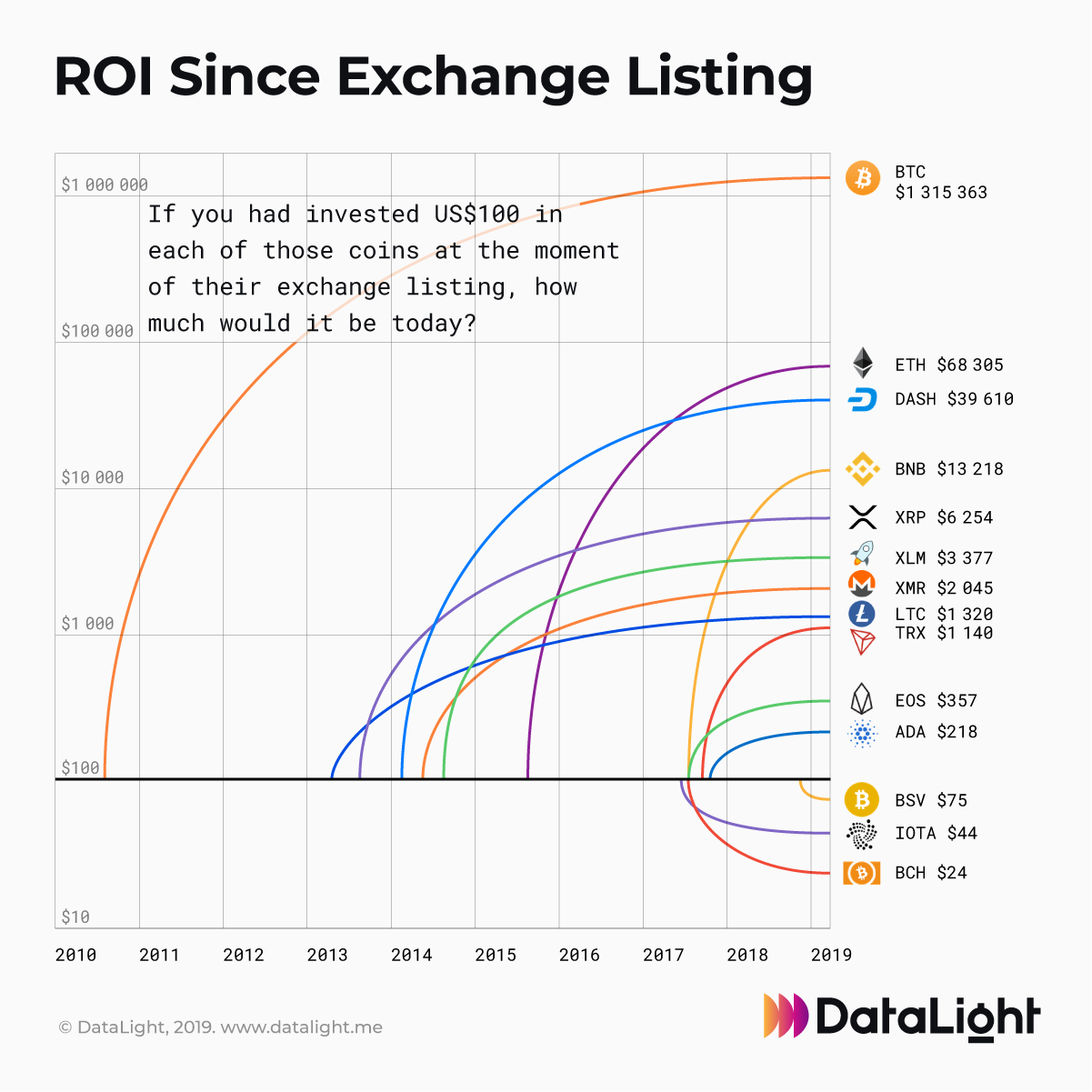 Performance of some notable altcoins since their inception (Source: DataLight)

Most top altcoins are likely to outpace the returns of Bitcoin in a bull market. However, there’s a caveat: these altcoins represent a much greater risk than solely buying Bitcoin. As 2018 reinforced, altcoins do very poorly against Bitcoin during bear markets.

Don’t just buy one full Bitcoin blindly. Ascertain your risk tolerance, and decide what is best for you. Nevertheless, the asymmetric payoff for Bitcoin is too immense to completely ignore. A small amount into Bitcoin or other viable cryptocurrencies is likely to yield a incredible return on investment in the coming years.

Lastly, the fear of missing out will likely return when the market is pushing new heights, causing a buying frenzy. Unfortunately, it’ll be too late to reasonably own a full Bitcoin, let alone half a Bitcoin.

Disclaimer: The content above represents my opinion, therefore this is not intended to be investment advice.