The many traditions of non-governmental money (part i)

The central bank of the United States, the Federal Reserve, has put out “educational material” on Bitcoin for teachers and students (including a quiz!). The Bitcoin parts are odd enough, but this and a subsequent blog post will focus on the following statement: “traditionally, currency is produced by a nation’s government.” Is that a fair representation of monetary traditions? At the very least it is quite incomplete. This two-part series will proceed back in time, showing some of the many examples non-governmental money, in order to fill in some of the gaps.

Privately issued IOUs and privately minted coins are covered here in part (i) of the series. These IOUs can more specifically be described as bearer promissory notes, and even more specifically, when issued by banks, bank notes.

The Bitcoin public blockchain implements a global settlement layer (“layer 1” in bitcoin parlance). The closest historical analog to the Bitcoin settlement layer is not to the bank notes, nor even to the coins (despite its name), it is to the monetary metal that for most of monetary history from ancient civilization to the 20th century ultimately underlay the IOUs. This “metal layer” of historical money systems will be covered in part (ii) of this series, as will some even more ancient forms of non-governmental money.

Higher layers of the bitcoin ecosystem, which can include exchanges (centralized or decentralized) as well as more trust-minimized systems such as Lightning, correspond most closely in our rough historical analogies to checking accounts (which, although often counted by economists as part of the money supply, and not created or managed by governments, will be so familiar to most readers that they will not be covered in this series) and to private bank notes. In these higher layer monetary systems, a more computationally (or for bank notes physically) efficient medium is substituted for a less efficient medium (for bank notes, often the underlying metal), usually (as is the case with checking accounts, bank notes, and centralized bitcoin exchanges alike) at the cost of increasing trust and thus vulnerability and risk in the system. 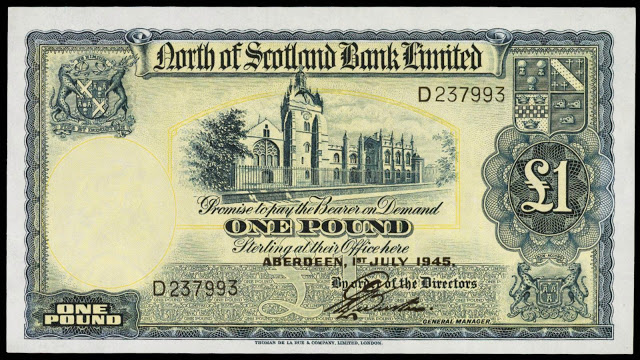 Bank note (bearer promissory instrument) issued by the North of Scotland Bank, 1945. Many banks besides central banks have issued bank notes that circulated as currency. George Selgin and Lawrence White among others have done extensive work in this area. Knowledge of the long history of non-governmental money was one of the inspirations of the original invention of trust-minimized cryptocurrency. This practice continues to this day in Hong Kong and Scotland. 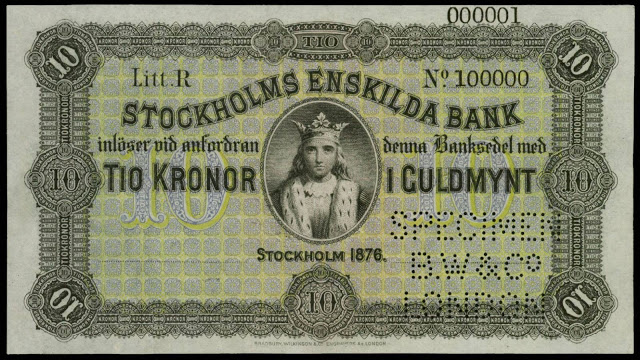 Stockholms Enskilda Bank note, Sweden, 1876. Critics have said that decentralized note issue, following the same principles of fractional reserve and maturity mismatch as central banks, were just as or more prone to runs on the bank. Defenders have argued that competition between note-issuing banks formed a peer-to-peer system where banks could redeem competitors’ notes, making it more reliable and robust form of fractional reserve banking than a central bank run or managed fractional reserve. 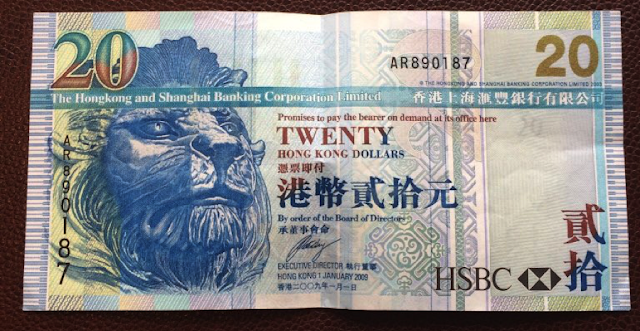 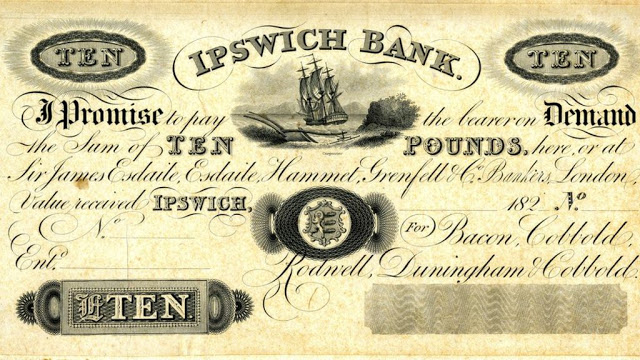 Ipswich Bank, a “country” (non-London) bank in England, 1820s (this instance unissued). Traditionally country banks, like the Bank of England, redeemed for specie, i.e. the official coin, which contained a standard weight of monetary metal (usually in this era silver). After 1833, Bank of England notes became legal tender which holders of country bank notes had to accept in lieu of specie.

Mechanic’s Bank note of 1856, Augusta, Georgia. Before our Civil War, most paper money in the United States was privately issued.

Boone County Bank note, Lebanon, Indiana 1858. “During this era the U.S. had no central bank and paper money was issued by a variety of private banks. Some was even issued by manufacturing and retail companies. This money was backed by gold, silver, real estate, stocks, bonds, and a wide variety of other assets. You can no longer cash them in, but they are now worth often substantial sums as collectibles…the note designs were more varied and creative than modern money, and were remarkably free of politicians’ faces.”Source

Hagerstown Bank note, Hagerstown, Missouri, 1850s (this instance unissued). Some other scholars within the Federal Reserve remembered the private note-issuing era in the United States; their central bankers’ view of it can be found here. 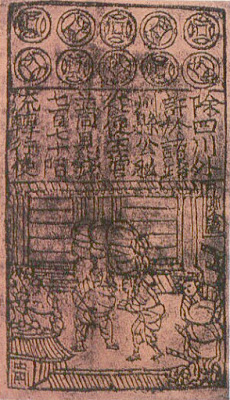 Jiaozi, a bearer promissory note from the Song Dynasty. The earliest jiaozi were issued in Sichuan province by merchants to relieve their fellow merchants of the high costs of transporting the heavy government-issued iron coins.

Gordon Tullock wrote of bearer promissory notes in an earlier time and different part of China,

By A.D. 700-800 there were shops in China which would accept valuables, and, for a fee, keep them safe. They would honour drafts drawn on the items in deposit, and, as with the goldsmith’s shops in Europe, their deposit receipts gradually began to circulate as money. It is not known how rapidly this process developed, but by A.D. 1000 there were apparently a number of firms in China which issued regular printed notes and which had discovered that they could circulate more notes than the amount of valuables they had on deposit. Source

A brass half-penny issued by grocer Edward Nightingale, probably dating from the early 1670s. [Source] While in most times and places, coinage was a royal or otherwise political monopoly, there were a number of important exceptions where coins were minted privately and successfully circulated as currency. Per monetary historian Glyn Davies, during the English Commonwealth, Protectorate, and early Restoration occurred “a vast issue by merchants, manufacturers, and municipalities, between 1644 and 1672, of copper tokens, mostly of farthings and halfpence.” [Davies p243] 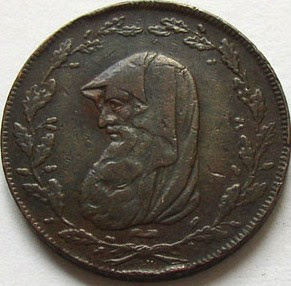 Anglesey & Mines druid half-penny, England, 1788. “From 1787 to 1797, private merchants and industrialists issued 600 tons of custom-made ‘commercial’ copper coin, which was more copper coin than the Royal Mint had supplied during the previous half century.” [Source]. 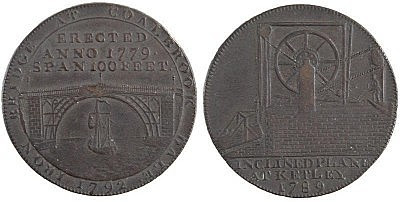 Ironbridge coin, minted by Coalbrookdale Works, Shropshire, England, 1782. In the industrial revolution, factories had to attract workers with frequent pay that could be spent at bargain shops. The Royal Mint was not producing low-denomination coins, so factories minted their own or used the coins minted by another firm. A good review by Jeffrey Hummel of George Selgin’s excellent analysis of this era here. 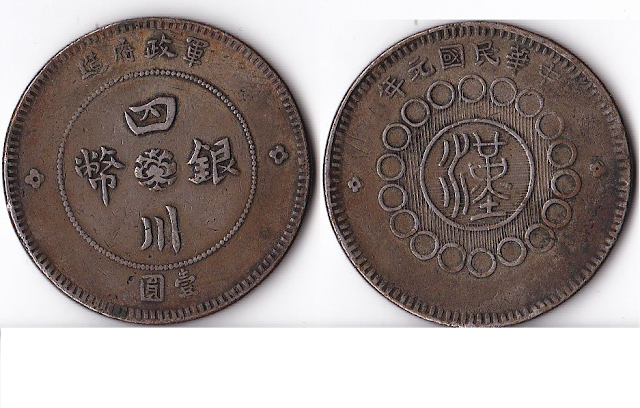 Privately minted coins from Sichuan province, China, 1912. While the minting of private coins, especially imitations of official coins, was often banned in order to secure a royal or other political monopoly, the industrial revolution was not the only time or place where private entities minted. Private coinage was by no means even limited to the Anglosphere. Nevertheless, the vast majority of coins in the numismatic record were minted by or under the license of kings, emperors, elected officials, and other kinds of political leaders, and these are also the kinds of coins prized by political historians as the most durable records of a leaders’ reign.

In part (ii) of this series we will explain and give a few examples of the monetary metals themselves, usually mined and processed by private entities. For most of monetary history, from ancient civilization until recent times, the monetary metals were the ultimate “O” in the IOUs – the substances that bearer promissory notes were most often redeemed for – and constituted the most common contents of the coins themselves. The various forms into which monetary metals could be shaped, including coins, were sampled and assayed for their metal content when used outside of the locale where they were issued or covered by legal tender laws.

Part (ii) will also explain why these metals, not any of their particular forms, are the closest analog we have to Bitcoin in monetary history. Finally, we will cover some the many other forms besides coins that these metals could take, the monetary and quasi-monetary functions of these forms, and get some glimpses of even more ancient forms that were the common ancestors of modern money and modern jewelry. Part 2 can only scratch the surface of this vast topic and will refer the reader to more in-depth works including those of this author.