Bitcoin is love, bitcoin is life. Currently writing words, soon back at writing code. Creator of http://21lessons.com and http://bitcoin-resources.com.

Why Bitcoin is a Living Organism 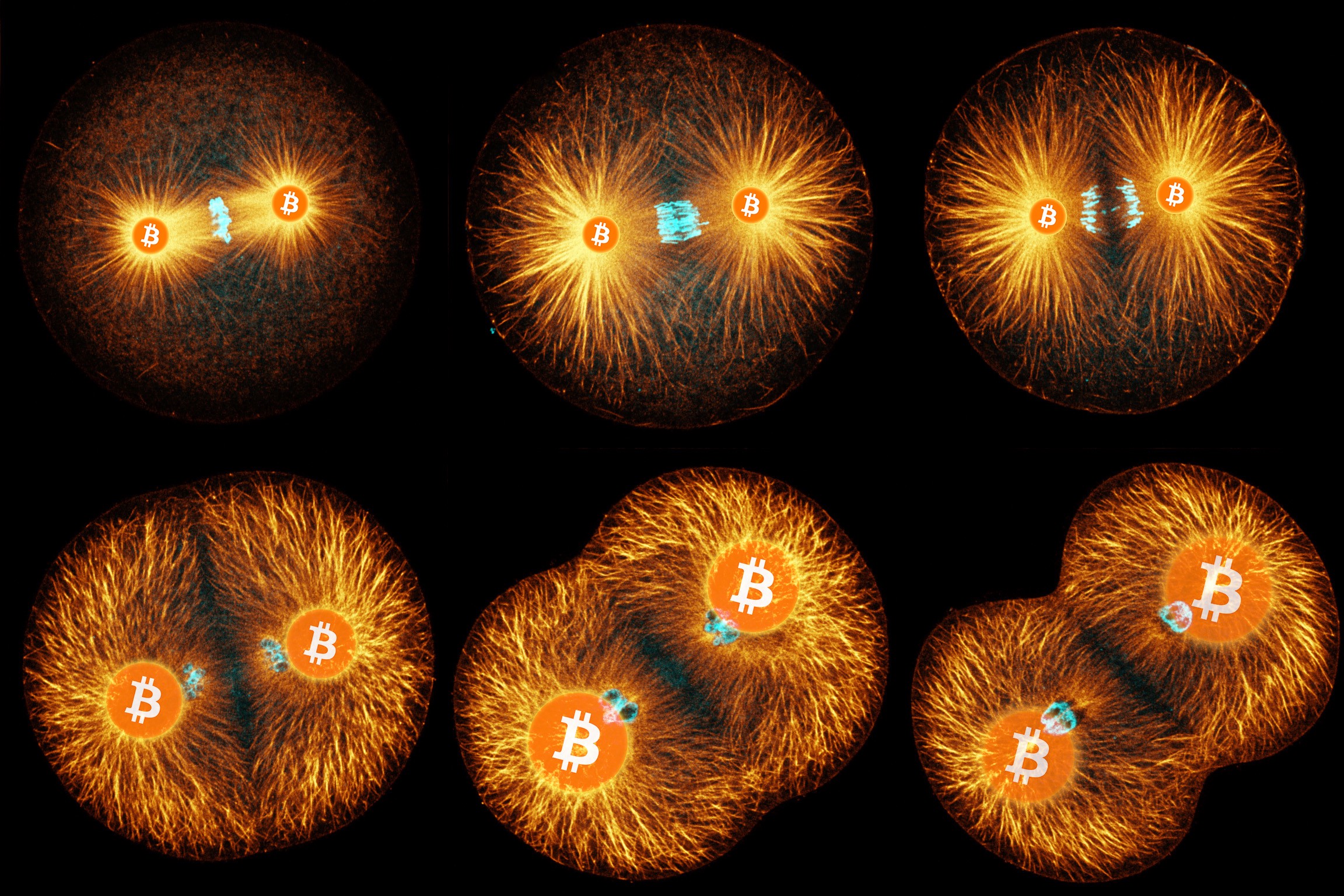 The definition of life has been a challenge for scientists and philosophers alike. While many definitions have been put forward, what precisely differentiates the living from the non-living remains elusive. Are viruses alive? DNA molecules? Computer viruses? Biologically produced minerals?

Ralph Merkle, inventor of cryptographic hashing and namesake of the Merkle tree, made the argument that Bitcoin is the first example of a new form of life. In this article series, I intend to take this claim seriously, explore it further, and see what can be gleaned from viewing Bitcoin as a living organism.

The first part will establish that Bitcoin is indeed a living organism. The second part will take a closer look at Bitcoin’s various habitats, and how changes in these habitats might affect the organism. In the third part we will dissect the Bitcoin organism, trying to understand some of its parts in more detail. Finally, we will perform the thought experiment of trying to kill Bitcoin, to illustrate the remarkable resilience of this strange, decentralized organism.

The question of whether something is alive or not obviously hinges on one’s definition of life. Life is endlessly complex, so it is no surprise that answering the question “What is Life?” leads to a multitude of answers. New-age speculations aside, it seems that life is a process, not a substance.

We can try to describe this process by looking at things which are alive, and looking at what they do: they tend to grow, reproduce, and respond. They inherit traits, are made up of smaller units (cells), and use energy to maintain their internal structure in the face of entropy. 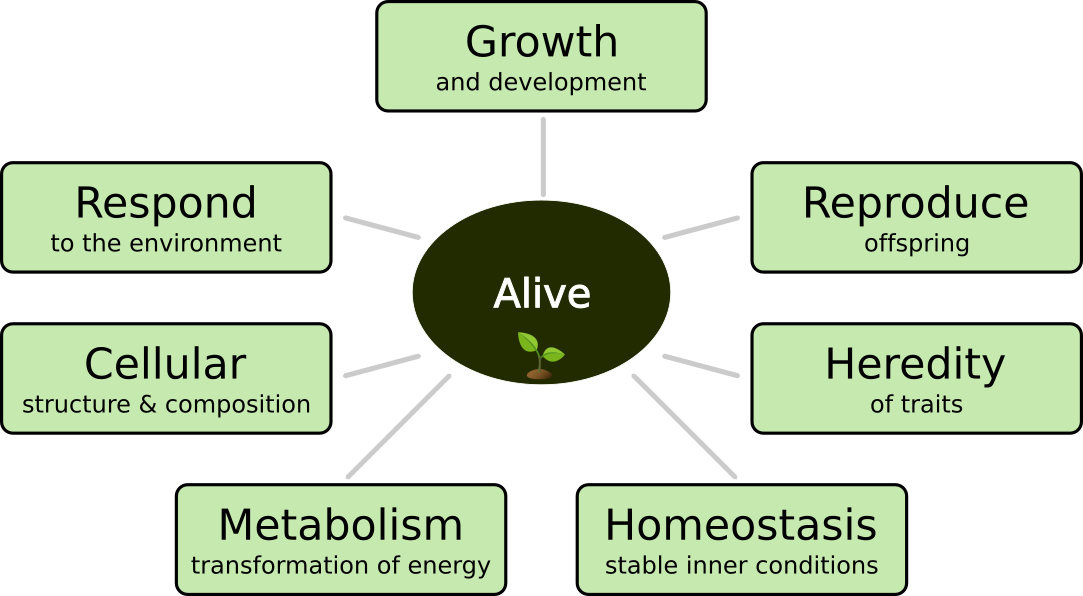 Based on Chris Packard’s Characteristics of Life, cc-by-sa 4.0

From a physics perspective, living things are thermodynamic systems: they utilize the energy-differences in their surroundings to maintain a specific molecular organization and create copies of themselves. Thermodynamically speaking, living systems are able to decrease their internal entropy at the expense of “free” energy taken in from the environment. In short, living things create order out of chaos.

Bitcoin is doing exactly that: it takes energy from the environment and puts things in order, i.e. it decreases its internal entropy. It does so by appending blocks to a well-ordered structure. Some call this structure the blockchain, others call it a distributed ledger. I will refrain from using either name, since the name of this particular structure isn’t important, and doesn’t help to convey a deeper truth: that this structure is just one part of a large and complex system, just like the backbone in vertebrates. It is important, no doubt. But distributed or not, a ledger on its own is as useful and as alive as a bag of bones.

To understand why Bitcoin behaves animatedly we will have to look beyond the buzzwords and ask ourselves what Bitcoin actually is, what it is made of, and what its boundaries are.

Compared to biological life, Bitcoin is quite simple. Nevertheless, finding a succinct answer to “What is Bitcoin?” is not.

Depending on your background it might be a computer network, a financial revolution, a way to protect your wealth, a payment system, a global settlement layer, an alternative to central banking, sound money, a parallel economy, an exercise in free speech, a bubble, a pyramid scheme, a messaging system, a communications protocol, an inefficient database, internet money, or all of the above. In short, Bitcoin is different things to different people.

Whatever Bitcoin might be, it undoubtedly is a force to be reckoned with. It has a life of its own, and thus arguably, it is best described as a living thing.

Many people seem to have come to this conclusion independently. Bitcoin is described as an army of leaf-cutter ants in Andreas M. Antonopoulos’ Mastering Bitcoin — a biological system which is working in concert without a central coordinator. The honey badger, an animal which is commonly used to refer to Bitcoin (since it doesn’t care and isn’t afraid of anything) is on the cover of Jimmy Song’s Programming Bitcoin. Dan Held compared the invention of Bitcoin to planting a tree, examining the species (code), season (timing), soil (distribution), and gardening (community) that were essential to its success. Brandon Quittem postulates that Bitcoin is most similar to mycelium, the underground network which powers the fungi kingdom, and can thus be best understood as a decentralized organism.

Memes like these, especially if they survive and continue to be popular over a long period of time, tend to be right, conceptually. What people seem to be saying when they refer to Bitcoin as the honey badger is that, in essence, Bitcoin behaves like an animal which can’t be controlled, can’t be tamed, and doesn’t care too much about externalities.

Which particular organism Bitcoin resembles most closely will be left as an exercise for the reader. The above examples should merely illustrate that multiple authors made the intellectual leap of classifying Bitcoin as a living organism - a leap which I believe to be fascinating, useful, and ultimately, correct.

Bitcoin is a living organism, and we should try to understand it as such if we want to live in harmony with it.

As mentioned above, Ralph Merkle was the first to point out that Bitcoin can be seen as a living entity. He remarked that Bitcoin has spawned an incredible amount of excitement in the technical community, and tried to translate this excitement into something which can be understood by everybody: a new form of life.

While Bitcoin is indeed radically transparent, it is not perfectly obvious where Bitcoin begins and where it ends. Like all living things, Bitcoin isn’t just a uniform blob of matter. It is a dynamic, living thing, consisting of many different parts, all of which communicate with and influence each other, as well as other living things and the environment as a whole.

The Bitcoin organism is made up of many interlocking parts which work together to ensure the survival of the whole. As with biological organisms, as soon as one crucial part is missing, the whole organism is bound to die.

The Bitcoin organism manifests itself through the interplay of ideas, code, people, and nodes. All four of these conceptual pieces react to and influence each other in a value-generating feedback loop which keeps Bitcoin alive.

Whether people are part of the Bitcoin organism, or merely living in symbiosis with it, depends on your point of view. For now, let’s take an all-encompassing view of the Bitcoin organism, including people as one part of the whole. After all, just like we can’t live without a multitude of bacteria, fungi, viruses and other creepy-crawlies which make up the human microbiome, Bitcoin can’t live without us: the tiny beings in meatspace which keep it alive.

In any case, nodes and their operators are tangible things which are manifest in the physical world. Like the cells in your body, all physical components of the Bitcoin organism can and will be replaced over time. Node operators come and go, node and mining hardware is replaced periodically, and even whole mining farms go offline and are replaced by more cost-efficient facilities.

Ideas and code are more ethereal. They can’t be grasped or pointed to in the same fashion. However, Bitcoin has an essence, the soul of the organism, if you like. Note that this essence could, in theory, breathe life into a new host if the current incarnation of the organism dies. The ghost of Bitcoin is independent of its physical body, to borrow a metaphor from Shirow’s Ghost in the Shell.

As long as something is compatible with this essence, it will be treated as part of the whole. If something is incompatible, however, it will be rejected — just like biological organisms reject foreign objects inside their bodies.

Part of this essence is made explicit by Bitcoin’s consensus rules, other parts are repeated as mantras: “ not your keys, not your bitcoin” and “ run your own node” are gentle reminders of lessons learned, as well as shortcuts to a deeper understanding of what Bitcoin is and should be.

With a basic idea of the constituents and the extent of the Bitcoin organism in mind, let’s return to the descriptive definition of life above and see how Bitcoin maps onto each trait. 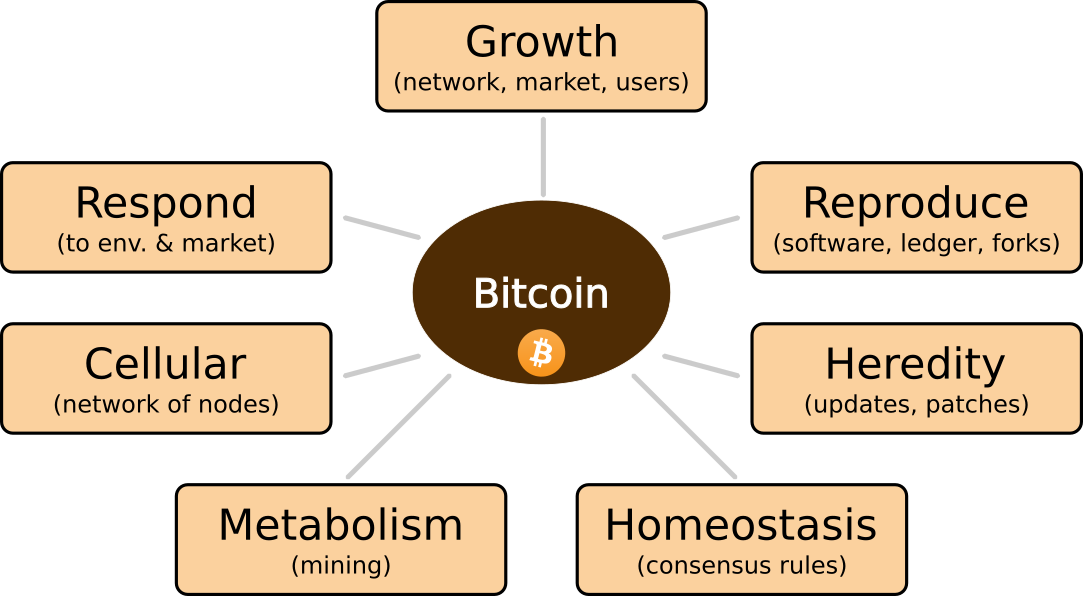 As mentioned above, life is a process, not a substance. A delicate dance of innumerable parts, all signaling and communicating in an intricate way to self-sustain each organism, and the phenomenon which we call life as a whole.

“Life is like fire, not water; it is a process, not a pure substance. […] The simplest, but not the only, proof of life is to find something that is alive.” — Christopher McKay

In the words of astrobiologist Chris McKay, the simplest proof of life is to find something that is alive. I have found Bitcoin, and as far as I can tell, it is alive — for all the reasons outlined above.

Bitcoin checks all the boxes when it comes to the characteristics of living things: it grows, reproduces, inherits and passes on traits, uses energy to maintain a stable inner structure, is cellular in nature, and responds to the various environments it lives in.

In the next part of this series we will take a closer look at these environments, and how Bitcoin responds to changes in them. Bitcoin lives and breathes on the internet, as Ralph Merkle beautifully said. But arguably, the internet isn’t the only environment it is living in.

For now, I hope to have convinced you that Bitcoin can be seen as a living organism — alien as it may be.

Thanks to Dan Held,Brandon Quittem, and Raph for their feedback on earlier drafts of this article.

I hope you have enjoyed this excursion into the world of the Bitcoin organism. If you like to accelerate the growth of both Bitcoin and this article series feel free to drop me a line, some applause on medium, or even some sats via the beast which is Bitcoin. Thanks for all the encouragement, and thank you for reading.

Thanks to Brandon Quittem and Dan Held.