By The Bitcoin Observer

TLDR: This is a multi-part series about the many ways in which Bitcoin is such a unique, inter-disciplinary, and inter-temporal technology. The third part touches on an overlooked advantage of Bitcoin over other traditional forms of commodity money, including gold.

I have been thinking for a while about why sound money survived for thousands of years but was quickly killed in the age of nation-states. When I bumped into this insightful tweet from Nick Szabo the reasons became clear to me. As we will see below, the points he makes are extremely important to understand Bitcoin’s advantages over gold. They might go beyond Bitcoin’s more rigid monetary policy and also have to do with the limitations of metallic money in regards to the expansion of commerce and trade. 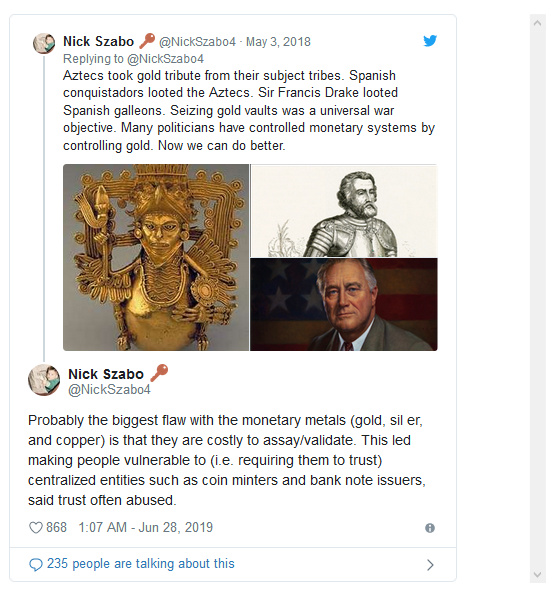 The Long and Winding Road From Metallic Coins to Paper Banknotes

Contrary to what some think, fiat money was not implemented suddenly in 1971 when Nixon closed the gold window or in 1974 when the IMF changed the SDR composition from gold to a basket of fiat currencies. Jim Rickards showed in his book The Road to Ruin that the classical gold standard was actually killed in stages starting with the Austro-Hungarian ultimatum to Serbia and the outbreak of World War I in 1914. The next five paragraphs summarize his argument.

Right after the start of WWI, nations were aware that gold reserves were a determinant factor of victory and suspended redemptions in specie. The two exceptions, for different reasons, were the US and the UK. However, that’s exactly when gold coin circulations were replaced by 400-oz bars, the gold delivery standard until today, in London, which was the undisputed global financial center at the time. This change gradually disincentivized people to hold and transact money in-specie (a 400-oz gold bar today is worth about $500,000) and use banknotes instead.

With the end of WWI in 1918, the new habit of holding banknotes instead of gold coins was ingrained not only in the UK but throughout Europe and increasingly in the US. Gold could still be privately owned, but it was buried out of sight and out of mind. Another major boost to monetary base centralization was FDR’s famous 1934 order 6102 that required US citizens to surrender private gold to the government. Fort Knox was built three years later.

In stages between 1914 and 1934, U.S. gold went from private hands, to bank hands, to central banks, to the Treasury. This paralleled the process that took place in the United Kingdom and other developed economies. Governments made gold disappear.

At the outbreak of World War II, gold convertibility, to the extent that remained, was again suspended. The only major gold dealer at that point was the Bank of International Settlements (BIS). The BIS acted as a broker of Nazi gold, including gold taken from Jews and other Holocaust victims. By the end of WWII, gold did not circulate as currency anymore. The Bretton Woods Agreement of 1944 introduced the gold exchange standard, meaning it applied to nation-states but not to its citizens.

It should be clear by now that it was only a matter of time until the implementation of a full fiat monetary system, which came in 1971 when Nixon closed the gold window. The growing influence of Milton Friedman and his idea of “elastic money” as a remedy that could have avoided the Great Depression provided the intellectual justification politicians needed for the implementation of the monetary system we have until today.

Jörg Guido Hülsmann, probably the greatest monetary economist alive, went a step further and also analyzed the process of demonetization of silver under the perspective of monetary base centralization in his monumental The Ethics of Money Production.

Many Bitcoiners believe that gold won the battle against silver due to its higher stock-to-flow ratio. According to Hülsmann, this view is misguided. There is plenty of evidence that the demonetization of silver was not a free market process, but one heavily engineered by governments. Mises seems to be more or less in accord with this view when he discusses this matter in Theory of Money and Credit:

And while some thus regarded gold as nothing less than the embodiment of the very principle of evil, all the more enthusiastically did other exalt the glistering yellow metal which aline was worthy to be the money of right and mighty nations. It did not seem as if men were disputing about the distribution of economic goods; rather it was as if the precious metals were contending among themselves and against Paper for the lordship of the market. All the same, it would be difficult to claim that these Olympic struggles were engendered by anything but the question of altering the purchasing power of money.

Here I’ll summarize Hülsmann’s argument. Until the 1860s, only the US and some major parts of the UK empire had been on what we today call the classical gold standard. Things changed with the German victory in the Franco-Prussian war of 1870–71. Germany obtained an indemnity in gold and used that to institute a monetary model similar to Britain’s. The Prussian Central Bank, later rebranded the Reichsbank in a marketing coup, was instituted four years later.

Why did the Germans institute a gold standard and not a silver standard or the bi-metallic systems that were floating around? One factor is that gold had better externalities — Britain, the world’s financial center — was on gold and the major silver countries (Austria and Russia) had suspended silver payments at the time of German victory. Gold at that time provided more advantages from an international division of labor standpoint. But Hülsmann points to another reason as well:

Moreover, one should not neglect that silver, the only serious competitor for gold among the commodity monies, has one grave disadvantage from the point of view of a government bent on inflationary finance. Because of its bulkiness, the use of silver entails higher transportation costs, which makes it less suitable than gold for fractional reserve banks trying to quash systematic bank runs through cooperation.

Virtually all western countries followed suit. By the early 1880s, all countries of the West and their colonies had adopted the British monetary model. The silver lining of the classical gold standard was that it demonstrated how a world monetary system can emerge without central coordination. There was no conference, no treaty. The countries adopted it independently of each other.

However, this was done at the discretion of national governments, not at its citizens’. The classical gold standard was brought by the coercive elimination of the alternative monies and it paved the way for government interventions in the monetary system. It ignited the age of national central banks and private fractional-reserve banks taking control of the monetary system. This does not look like a bulwark for the liberty movement.

We have to stress these facts because many advocates of the free market believe the classical gold standard was something like the paradise of monetary systems. This reputation is underserved. The classical gold standard differed only in degree, not in essence, from its successors, all of which have been widely and deservedly criticized in the literature on our subject.

In sum, Hülsman states that the lethal hit that World War I brought to the classical gold standard only anticipated its death from its own cancer. This is not a silver bug argument, but an argument against coercive centralization of the monetary base. Earlier in this same book Hülsmann defines what fiat money is: one that artificially circulates more than the unhampered market would set. This definition also applies to gold in the classical gold standard.

So now we understand that the institution of the fiat system was just the culmination of a process that was going on for about one hundred years before Nixon’s order in 1971. Citizens were coerced to trade silver coins for gold coins, then gold coins for gold bars stored in private banks and finally to gold bars stored with the government. Without this fiat money would be a lot harder, or maybe even impossible, to implement.

How was this process so swiftly accepted by the population? In my opinion, this centralization of the monetary base that led people to trade in IOUs instead of in specie actually brought some advantages to commerce and trade. As Nick Szabo points out, metallic money is hard to assay/validate and is also relatively hard to transport.

As economic activity expands with respect to number of transactions and to geographical footprint, dealing with physical money becomes impracticable. IOUs were a boon to commerce and trade from this standpoint, despite all the additional trust it required and all the monetary base centralization it entailed. Metallic money does not scale well in response to more commerce and trade activity, fiat money actually beats gold there. Bitcoin fixes this. 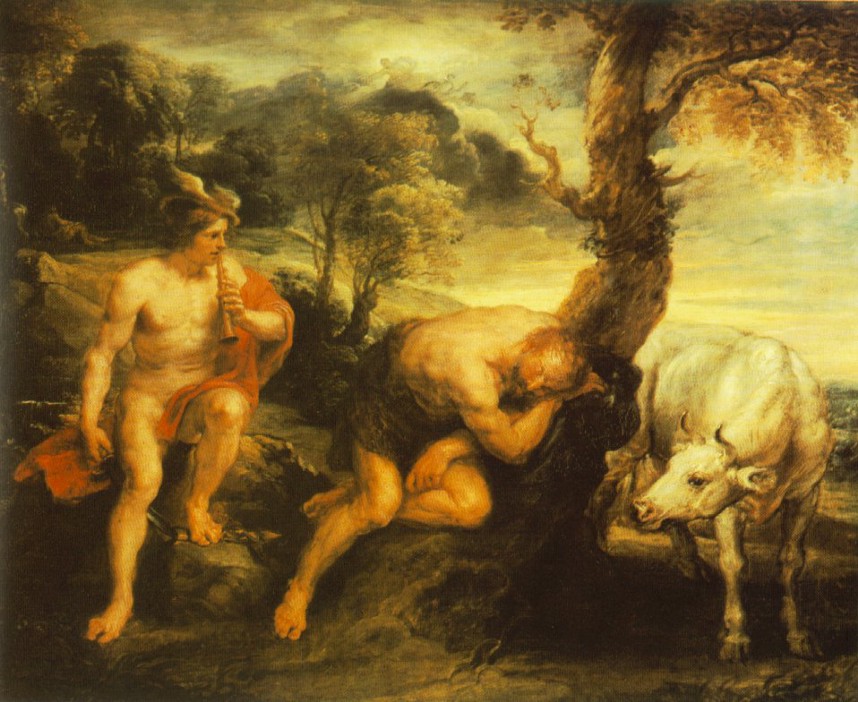 Bitcoin makes the cost of transportation and validation negligible without adding any counterparty risk to the system. This monetary evolution can not be overstated. At this point, I also hope that the importance of these properties for a sustainable sound money in the internet age is clear. Metallic money did not survive the age of globalization and nation-states because it did not scale well. Bitcoin optimizes for that while still sustaining the highest stock-to-flow ratio of any monetary asset. That’s its 10x improvement right there!

Bitcoin’s harder monetary policy compared to gold is usually cited as the main factor that will make it succeed. This is certainly an advantage and a pre-condition for it to be sound money in the first place. However, the question of whether this improvement is enough for Bitcoin to leapfrog gold’s massive Lindy effect is a valid one that has been bothering me for a while. Answering this with the possibility of gold mining in space might be a bit far-fetched at this point. The catalyst for Bitcoin’s extremely high stock-to-flow ratio to shine is how well it scales with commerce and trade activity.