Lightning is Only the Beginning: The Emerging Bitcoin Stack 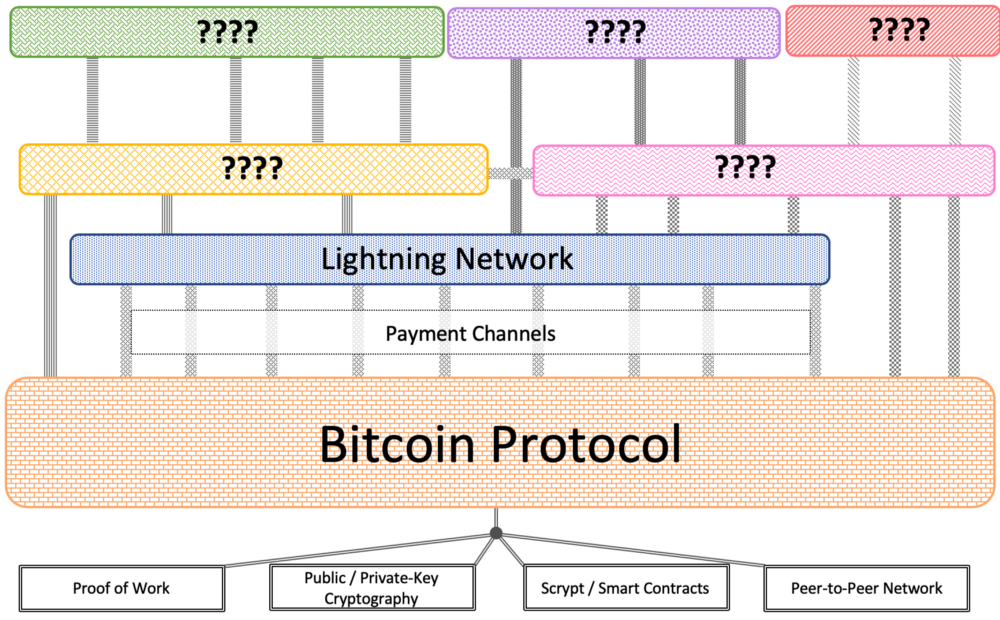 For the past year or two, Bitcoin’s lightning network has been one of the most closely watched developments in the crypto industry and while I’m very excited about the new possibilities enabled by the Lightning Network, I can’t help but ask: What about the other layers?!

After all, the Lightning network is just one layer in the emerging Bitcoin stack. These various layers, or protocols, will likely all serve different functions but with one underlying commonality: they all exist to make Bitcoin even more useful than it already is.

The Bitcoin stack is a set of building blocks that can be assembled in unique ways to deliver novel and compelling functionality.

For example, payment channels leverage the Bitcoin network and multi-sig transactions as building blocks to enable people to quickly, cheaply, and reliably transact Bitcoin directly between one another without incurring the costs of on-chain transaction fees and delays from block times.

After all, Bitcoin is programmable money — and while it remains to be seen * what exactly* people will create up the stack, I have no doubt that human ingenuity coupled with an open permissionless network of programmable money will create incredible functionality that delivers compelling utility to holders and users.

Regardless, to think that lightning will be the only layer, and that fast & cheap transactions is all we’ll be able to do with programmable money is like thinking that the internet will only be used for sending messages faster — that email is the only use case and the internet is really just a replacement for the post office or the fax machine.

To be fair though, when you’re in the dial-up era — which is probably where Bitcoin is today — it’s tough to anticipate Spotify, Facebook and Twitter.

And while it’s tough to anticipate exactly what people will create, it seems reasonable that up the stack there could be protocols that do things like enhance privacy, offer more expressive functionality, or facilitate the lending/borrowing of Bitcoin — among many other potential purposes.

Ultimately, lightning is an important building block in the emerging Bitcoin stack — but it’s only the beginning. As we see momentum coalescing around the Bitcoin protocol, we’re entering a unique period in Bitcoin’s history with compelling opportunities to deploy capital with teams that are building on Bitcoin.

Along these lines, we’re sponsoring and hosting the Lightning Developers meetup group in San Francisco. Please sign up here if interested in attending future events: https://www.meetup.com/Lightning-Developers/events/260891282/ . You can also sign-up for our monthly newsletter at the bottom of the page here: https://blockchain.capital/

Disclosure: I own Bitcoin personally and have exposure via Blockchain Capital’s venture funds.

Note: Special thanks to Derek Hsue for feedback and help thinking through the Bitcoin stack.