Amid the commotion and flurry of excitement as crypto surged into mainstream, the significant implications of many real fundamental innovations being developed have been drowned out by the din of hand-wavy, hyperbolic claims. In this_ **_“Crypto Innovation Spotlight”_ _series, I hope to shine a light on fundamental innovations that are driving our industry forward.**

Schnorr — What is it?

If adopted, Schnorr would be an alternative to Bitcoin’s current ECDSA (Elliptic Curve Digital Signature Algorithm).

What does it do?

What does “aggregation capabilities” actually mean? What are we aggregating?

To put it simply, Schnorr signatures can aggregate multiple distinct signature into a single signature. This signature aggregation capability is particularly valuable in light of the amount of space that is consumed by signature data in a Bitcoin transaction — this is depicted visually in Figures 1 & 2, below:

Schnorr signature aggregation is potentially helpful in a few different ways that each has derivative benefits for the Bitcoin network and its users. 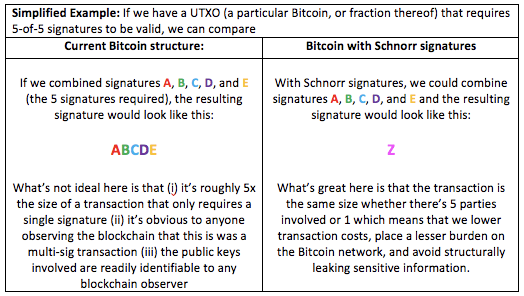 Second, it appears it’s also possible to extend to concept of Schnorr signature aggregation — with a scheme known as MuSig — to aggregate the signatures pertaining to multiple UTXOs into a single signature. Conceptually, it’s the same process as the example above but instead of just aggregating multiple-signatures that are required to spend a single UTXO, we extend the concept to also consolidate signatures across multiple UTXOs.

The end result is that while the former example enables us to achieve 1 signature per UTXO (even if the UTXO is technically constrained by multiple signatures), the latter example helps us to achieve 1 signature per transaction (which in itself could consume multiple UTXOs as inputs). This would mean a drastic reduction in the amount of data that needs to be processed and stored across the Bitcoin network (the benefits of which are discussed in more detail below).

Why do we care? What are the advantages and economic implications?

In short, these aggregation capabilities improve Bitcoin’s efficiency and privacy.

In terms of efficiency, the big benefit is smaller transactions — which means lower storage and computation costs. Indeed, Schnorr multi-signature transactions are even more compact and efficient than single-signature transactions in Bitcoin today. That’s important because it lowers transaction fees for users and minimizes resource requirements for network participants (e.g. full nodes, mining).

Said differently, Schnorr signatures help us avoid leaking info about the public-key identities that are party to a multi-sig contract and even help us avoid revealing whether or not a transaction is multi-sig or not.

Lastly, Schnorr-based MuSig could also offer an indirect privacy advantage by improving the economics of multi-sig contracts: if we can aggregate signatures across multiple UTXOs, MuSig could incentivize the usage of privacy-enhancing functions such as “coinjoin”. That is, with MuSig, users could realize lower transaction costs by aggregating their transactions with others (effectively sharing the cost of your transactions space with others) — which would improve network privacy as a whole.

Ultimately, I’m excited about the potential for Schnorr signatures in Bitcoin because they reduce the size of transactions (lower cost, less network overhead), minimize network resource demands (easier for people to verify transactions), and improve privacy.

Thank you to Andrew Poelstra and Jimmy Song for generously reviewing earlier drafts and offering corrections.